With 1.8 billion young people around the world – the largest generation of youth in history – senior United Nations officials are marking World Population Day with calls for a renewed commitment to helping young people improve their lives and the common future.

“Action is urgently needed,” Secretary-General Ban Ki-moon said in his message for the Day, stressing that too many young people are denied a right to a quality education, a decent job, and participation in the political life of their societies.

“The solution lies in investment in health, education, training and employment for young people as they undergo the critical transition to adulthood,” Mr. Ban underscored.

Half the world is under 25 years of age – nearly 90 per cent of them in developing countries, according to UN figures. However, half of those employed from the group are either unemployed or in Mr. Ban’s words, “stuck in low-wage, dead-end jobs.”

“I call on all with influence to prioritize youth in development plans, strengthen partnerships with youth-led organizations, and involve young people in all decisions that affect them,” the UN chief said. “By empowering today’s youth, we will lay the groundwork for a more sustainable future for generations to come.”

Young people are also speaking out for themselves, Mr. Ban said, noting that more than 1,000 youth organizations endorsed a Global Youth Call to recommend youth-focused goals and targets in the sustainable development agenda that will start after 2015, the deadline for the Millennium Development Goals (MDGs).

In his message, Executive Director of the UN Population Fund (UNFPA), Babatunde Osotimehin, said: “We know that healthy, educated, productive and fully engaged young people can help break the cycle of intergenerational poverty and are more resilient in the face of individual and societal challenges.”

Yet too many youth continue to grapple with poverty, inequality and human rights violations that prevent them from reaching their personal and collective potential, he said noting that according to the UN Educational, Scientific and Cultural Organization (UNESCO) an estimated 515 million adolescents and youth, aged 15 to 24, live on less than $2 a day, and millions more face gender discrimination and other forms of marginalization.

“A sustainable future depends on having resilient populations, which cannot be achieved without investments in young people,” said Dr. Osotimehin, adding that youth not only form a large proportion of the world’s population and deserve their fair share as a matter of equity, but are also in a critical stage of their lifecycle that will determine their future – and thus those of their families, communities, and societies.

Call on UN Member States and other stakeholders to invest in this generation of young people who are at the centre of the new post-2015 development agenda, General Assembly President John Ashe in his message on the Day, said that” only by partnering with young people can we make the planet more resilient and our future more prosperous.”

Observed annually on 11 July, World Population Day focuses attention on the importance of population issues in the context of development plans and programmes, and the need to find solutions for these issues. 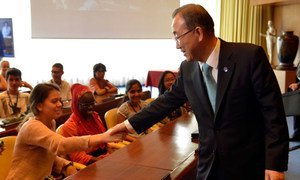 At a time when the international community is struggling to generate more jobs, especially for young people, United Nations Secretary-General Ban Ki-moon today urged Governments to invest more in youth employment initiatives and promote decent work for all.