“Today, we face the risk of an all-out escalation in Israel and Gaza, with the threat of a ground offensive still palpable – and preventable only if Hamas stops rocket firing,” the Secretary-General told the urgently-called meeting of the Security Council Thursday morning on the Middle East, which he told reporters yesterday that he had requested.

The Secretary-General said over the past several days, the Palestinian factions Hamas and Islamic Jihad have fired more than 550 rockets and mortars from Gaza into Israel, and the Israeli Defence Forces have launched more than 500 airstrikes on Gaza.

“It is now more urgent than ever to try to find common ground for a return to calm and a cease-fire understanding,” he said.

“Once again civilians are paying the price for the continuation of conflict,” Mr. Ban said. “My paramount concern is the safety and well-being of all civilians, no matter where they are. It pains me – and it should pain us all – to be reliving circumstances that are all too reminiscent of the two most recent wars in Gaza.”

He said “the excessive use of force and endangering of civilian lives are also intolerable. It is unacceptable for citizens on both sides to permanently live in fear of the next aerial attack.”

The UN chief said he has been engaging with world leaders, including the King of Saudi Arabia, the Emir of Qatar, the President of Egypt, the heads of the League of Arab States and the Organization of Islamic Cooperation, the United States Secretary of State and European Union High Representative and other regional and world leaders.

“I have also spoken to Prime Minister Netanyahu of Israel and President Abbas of Palestine,” he said. “I called on both sides to exercise maximum restraint, show statesmanship and to weigh the risks of further escalation.”

Saying the current situation is one of the most critical tests the region has faced in recent years, the Secretary-General said: “More than ever, the situation calls for bold thinking and creative ideas. We must strive to restore, not only calm today, but a political horizon for tomorrow.”

“The parties themselves, regional partners and the international community must do everything possible to resume meaningful negotiations towards a viable two-State solution,” he said.

Israeli-Palestinian violence has flared in the wake of the kidnapping and murder of three Israeli teenagers in the West Bank in late June and the subsequent kidnapping and killing of a Palestinian teenager from East Jerusalem last week. These acts shattered a period of relative calm and were widely condemned by the United Nations and the international community.

The Secretary-General told reporters at UN Headquarters yesterday that the United Nations is ready to rapidly respond to emerging humanitarian needs, and noted that the Organization is already working closely with Palestinian and Israeli authorities and other partners, including the Palestinian Red Crescent. 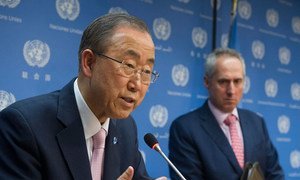 Warning that Gaza is on a knife’s edge, Secretary-General Ban Ki-moon said today the situation could spiral quickly beyond anyone’s control, and urged the international community to work with Israeli and Palestinian leaders to avert further escalation “in a region that can ill-afford another full-blown war.”