10 July 2014
An additional 2.5 billion people are predicted to live in urban areas by 2050, the United Nations today reported, highlighting the need for a successful urban planning agenda and greater attention to be given to smaller cities where nearly half of all people currently reside.

“Today, 54 per cent of the world’s population lives in urban areas, a proportion that is expected to increase to 66 per cent by 2050,” the Population Division of the UN Department of Economic and Social Affairs said in its 2014 revision of the World Urbanization Prospects report.

Projections indicate that urbanization combined with overall growth will contribute to the 2.5 billion jump, with 37 per cent of the projected growth in India, which currently has the largest rural population, China and Nigeria, in that order.

New Delhi, currently the world’s second most populous city with 25 million inhabitants, is expected to retain that spot through at least 2030, when its population is projected to reach 36 million.

The future demography is expected to change, with these so-called ‘mega-cities’ falling in rank as relatively smaller urban cities, particularly in developing countries, gain in population.

The most urbanized regions rights now include Northern America, where 82 per cent of the population lives in urban areas, followed by Latin America and the Caribbean with 80 per cent, and 73 per cent in Europe.

By contrast, Africa and Asia remain mostly rural, housing nearly 90 per cent of the world’s rural population. Their urban areas are on the rise, however, and while at least 40 per cent of the population in African and 48 per cent in Asia live in urban areas, they are projected to be home to 56 and 64 per cent urban, respectively, by 2050.

“These countries will face numerous challenges in meeting the needs of their growing urban populations,” the report authors said, including for housing, infrastructure, transportation, energy and employment, as well as for basic services such as education and health care.

“Managing urban areas has become one of the most important development challenges of the 21st century,” said John Wilmoth, Director of the Population Division, who spoke to the press at headquarters today, along with François Pelletier, Chief of the Population Estimates and Projections Section. “Our success or failure in building sustainable cities will be a major factor in the success of the post-2015 UN development agenda.”

The new addenda, which the international community is currently crafting, is intended to build on the eight Millennium Development Goals (MDGs), which set specific targets on poverty alleviation, education, gender equality, child and maternal health, environmental stability, HIV/AIDS reduction, and a global partnership for development – all by a deadline of 2015.

In this latest report, the authors noted that “well managed, cities offer important opportunities for economic development and for expanding access to basic services, including health care and education, for large numbers of people.”

Authors added that provision of public goods, such as public transportation, housing, electricity, water and sanitation for a densely settled urban population is typically cheaper and less environmentally damaging than providing a similar level of services to a dispersed rural population. 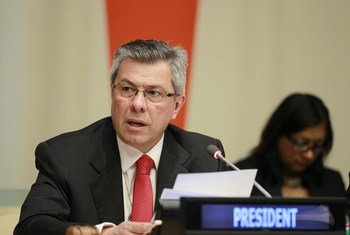 27 May 2014
With 6.3 billion people expected to live in urban areas by 2050, the United Nations Economic and Social Council (ECOSOC) today kicked off a three-day event to look at challenges and opportunities for the sustainable future of cities.