In what it termed a “brutal” attack, the United Nations peacekeeping operation in the Central African Republic (CAR) today condemned the killing of dozens of displaced people at the site of Saint Joseph Cathedral and the Bishop's residence in Bambari.

As many as 6,000 people are believed to have been taking shelter at the church, according to media reports. On 7 July, rebels purportedly entered the site and killed at least 27 people, including women and children.

The UN Multidimensional Integrated Stabilization Mission in the Central African Republic (MINUSCA) “condemns in the strongest possible terms all acts of violence,” a UN spokesperson said in New York.

The UN Mission remains actively engaged in efforts to end the violence and strongly encourages all parties to lay down they arms and engage in political and reconciliation processes aimed at putting a sustainable end to the cycle of violence in the country, he added.

Violence in Bambari has escalated at an alarming rate, according to UN officials, and there is increased targeting of civilians in the area, which is reportedly home to one of the country's Roman Catholic diocese.

Fighting in the country overall has been increasing, fuelled by what are believed to inter-communal retaliatory attacks between anti-balaka and Séléka rebels, after the latter were ousted from power in January 2014. An estimated 2.2 million people are believed to be in need of humanitarian aid as a result.

In late May, the UN Security Council strongly condemned the latest wave of violence in the country. It stressed that the CAR Transitional Authorities have the primary responsibility to protect civilians, and to encourage them to take the necessary measures to prevent further violence in the capital, Bangui, and throughout the country. 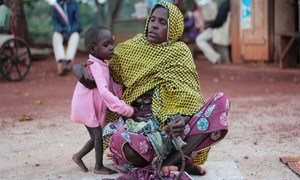 Warning about the deteriorating situation in the Central African Republic (CAR), the United Nations World Food Programme (WFP) said today that the violence there was threatening humanitarian assistance and creating major difficulties for relief workers in the field.