UNHCR/ F. Noy
Tens of thousands of desperate people are attempting to reach Europe in dangerous boats like these in Libya.
8 July 2014

Search and rescue operations are ongoing for survivors following a recent boat accident in the Mediterranean, the latest tragic incident off the Libyan coast of Tripoli, according to the United Nations Refugee agency (UNHCR).

Since this past Sunday when the accident occurred, 12 bodies have been found by the Libyan coast guard, which informed UNHCR on Monday that the dead included three Syrians – including the mother and her children aged three and six – three Eritrean nationals and six other Africans of as yet undetermined nationalities, UNHCR spokesman Adrian Edwards told a news briefing in Geneva.

The ship was probably carrying more people than its original capacity of 200 passengers, he said, adding that search and rescue operations are ongoing and the fate of others who may have been aboard is unknown.

According to UNHCR, about 217 people have drowned off the Libyan coast while trying to cross the Mediterranean in 2014. The number of asylum-seekers and refugees registered in our world today has increased, reaching almost 37,000 individuals. However, not all asylum-seekers are registered.

"Many asylum-seekers live in precarious conditions – such as over-crowded accommodations with little legal access to employment and have been affected and further displaced by the current unrest in Libya" said Mr. Edwards.

Syrians make up the largest group of refugees and asylum seekers, with approximately 18,655 displaced people, followed by Eritreans, Somalis and Iraqis.

This year, many people have lost their lives on boat journeys near the coasts of countries such as Italy, Turkey and Greece. The number of victims in the Mediterranean so in 2014 has reached over 500 deaths.

For its part, UNHCR supports Government operations to search for and rescue those individuals trying to cross the Mediterranean.

"UNHCR applauds search and rescue operations by Government authorities but asks that such operations are further strengthened – particularly in areas with high concentrations of boat crossings" said Mr. Edwards. 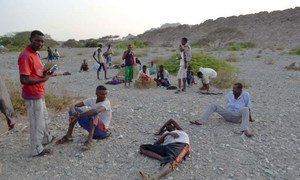 The United Nations refugee agency said today that 62 people are confirmed to have died when their boat foundered while trying to cross the Red Sea from the Horn of Africa to Yemen, making it the deadliest sinking this year.