IRIN/Otto Bakano
Malnutrition and diseases have plagued women and children who have trekked for months to escape the escalating violence in Central African Republic into neighbouring Cameroon.
8 July 2014

Warning about the deteriorating situation in the Central African Republic (CAR), the United Nations World Food Programme (WFP) said today that the violence there was threatening humanitarian assistance and creating major difficulties for relief workers in the field.

Speaking to reporters in Geneva, WFP spokesperson Elisabeth Byrs said the difficulties spawned by deteriorating security are only compounded by drought and lack of precipitation in parts of the country, notably in the northwest, causing yet another decline in agricultural production.

In addition, a lack of fuel for airplanes is hampering operations in the CAR. The United Nations air service has had to reduce its destinations by one flight a week, for all destinations. Fuel is expected to soon be brought by truck from Douala. On 6 July, 300 barrels of fuel were received by plane from Nairobi, equivalent to 600,000 litres, to maintain operations. Some 300 barrels are expected to be delivered from Douala.

Despite this, she said that in June, WFP had provided food assistance to 400,000 persons. Also in June, the agency provided school meals to 65,000 children, notably in Bangui, Bouar, Bossangoa, Paoua and Kanga-Bandoro. Nevertheless, the security situation remains volatile and hampers humanitarian aid, said Ms. Byrs.

Meanwhile, Mia Farrow, renowned actress, activist and UNICEF Goodwill Ambassador, has just completed her fourth visit to the CAR, where she saw the impact of extreme violence and met people with stories of inspiring courage.

"In 2007, I made the first of what would now be four visits to the Central African Republic. I must have left a part of my heart here,” said Farrow, speaking from Bangui. “The courage and resilience of defenseless people facing shocking and unacceptable levels of violence is unforgettable and profoundly inspiring."

According to UNICEF, in the town of Boda, more than four hours’ drive from the capital, she met with internally displaced Muslim families trapped in an enclave surrounded by armed groups hostile to them, who spoke of living in constant fear of attacks. At the only school still functioning in town, some 400 children were crammed into three classrooms. Parents were volunteering to teach after most of the school’s teachers fled for their lives.

In Bangui, Ms. Farrow spoke to a health worker who, for security reasons, was no longer able to get to her job at the main hospital and was instead volunteering to treat women and children in a health centre in her community.

More than 2.3 million children are suffering the consequences of the crisis rocking the country, says UNICEF. Children have been directly targeted. On average, at least one child has been maimed or killed in clashes every day in the past six months.

Malnutrition rates are high and the number of children associated with armed groups could be as high as 10,000, according to the Ministry of Disarmament, Demobilization and Reintegration. One in three children who were enrolled in the last school year did not go back to school this year.

“We need the support of the international community to help provide security so that schools can be rebuilt and children can safely return to them," Ms. Farrow said. 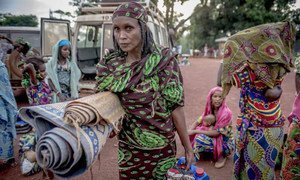 Thousands of people are fleeing new violence and reprisal attacks in and around the town of Bambari in Central African Republic (CAR) that have already left at least 45 people dead and scores more wounded, the United Nations refugee agency reported today.