“This is not something that can or should be done hurriedly, remotely and on high seas,” said Ms. Ravina Shamdasana, spokesperson for the UN High Commissioner for Human Rights (OHCHR).

International law requires that every case be individually examined on its own merits along with procedural safeguards and due process guarantees. Any returns, even from the high seas or in the territorial seas of other States, must be carried out in accordance with international law, under which handing back victims to their persecutor and collective expulsions are strictly prohibited.

She welcomed the High Court of Australia’s issuance of an interim injunction against the return of another 153 other Sri Lankan asylum seekers, reportedly including 37 children. Intercepted by Australian authorities over a week ago, however, those on the vessel have not been able to make contact with family members or refugee organisations.

A full judicial review in light of Australia’s obligations under international law is required in accordance with various UN Conventions, including the principle of non-refoulement – the prohibition on the forced return of a person to a country where his or her life or freedom would be threatened – the Convention against Torture, and the Convention on the Rights of the Child. 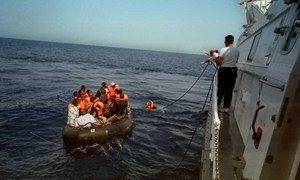 The United Nations High Commissioner for Refugees (UNHCR) today voiced deep concern after Australia handed over some 41 asylum-seekers to Sri Lanka after intercepting them at sea, and highlighted its unease with shipboard processing of protection claims.