In a statement from his spokesperson, a saddened Mr. Ban recalled Mr. Shevardnadze’s “significant contribution” on the international stage as Foreign Minister of the Union of Soviet Socialist Republics, and later as Georgia’s President during the country’s “challenging early years.”

The 86-year-old Mr. Shevardnadze died after a long illness, according to media reports.

Mr. Ban extended his sincere condolences to the bereaved family, as well as the Government and people of Georgia.

Among the issues on which Mr. Shevardnadze worked through the UN, was to advocate for nuclear disarmament.

In 1985, the then-Foreign Minister, addressing the UN General Assembly’s high-level opening, reportedly said: “It should be remembered that the higher the level of military confrontation in this nuclear- and space-age, the more shaky and less secure, even if strategic equilibrium is maintained, become the foundations of world peace.”

“Notwithstanding the importance of such steps as moratoria designed to put a brake on the arms race, the peoples of the world have every right to demand that radical measures be taken to reduce and eventually eliminate nuclear, and not only nuclear, weapons,” he added. 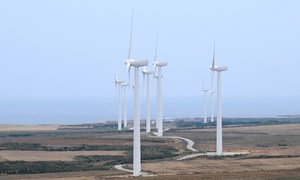