Condemning this morning's attempted attack on Somalia's Parliament, the United Nations envoy to the country has called on all Somalis to unite with the authorities to thwart future attacks and “bring to justice those behind this murderous campaign” of terror that has intensified since the start of Ramadan.

In a press statement, Special Representative of the Secretary-General, Nicholas Kay, condemned the attack on the Somali Parliament and the many killings claimed by Al-Shabaab's since the start of the holy month of Ramadan.

According to news reports, a car bomb went off earlier today just outside the main gates of Parliament in Mogadishu, killing at least four people. This is the latest in a string of high-profile attacks, including against Parliament itself.

Just two days ago, a prominent Member of Parliament, Ahmed Mohamud 'Hayd', was shot dead in the city, a murder also claimed by al-Shabaab. That incident was strongly condemned by Mr. Kay and the members of the UN Security Council.

While deploring today's attempted attack on Parliament, Mr. Kay commended the bravery of the security forces that lost their lives ensuring the terrorists were thwarted.

“Al-Shabaab have bombed, assassinated and terrorized Somalis in Mogadishu since the start of the holy month of Ramadan, a month dedicated to prayers and peace,” the envoy declared, calling on all Somalis to unite and work with the authorities to prevent further attacks and to bring to justice those behind this murderous campaign.

Mr. Kay underscored that the UN is working side by side with the Somali people to build peace and a new, functioning State.

“We are working actively with the Federal Government, AMISOM [African Union Mission in Somalia] and international partners to build strong Somali national security forces to protect and serve all Somali people” he added.

Finally, Mr. Kay offered his sincere condolences to the family and friends of those killed, as well as to the Federal Parliament of Somalia, and wished a quick recovery for the injured. 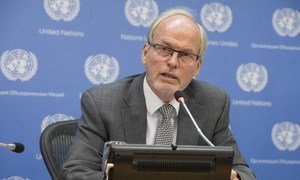 The Security Council and the head of the United Nations Assistance Mission in Somalia (UNSOM) have condemned the killing today in Mogadishu of parliamentarian Mohamed Mohamud ‘Hayd’.