Sudan has forced dozens of Eritrean refugees and other asylum seekers to return to their home country, the United Nations refugee agency (UNHCR) said today, warning that the recent deportations are “an act of repression” and could place the lives and liberty of those expelled at risk.

Melissa Fleming, UNHCR spokesperson told the press in Geneva today that the agency is deeply concerned over recent forced returns, or “refoulement”, of Eritrean and other asylum seekers and refugees from Sudan, including an incident in Eastern Sudan on 30 June where 74 Eritreans were sent back to Eritrea through Laffa border crossing point, according to information received from immigration authorities.

She said the asylum seekers had been convicted on charges of illegal entry into Sudan under national immigration laws. They had not given access to asylum procedures in order to have their claims reviewed by the competent authorities.

"These deportations are an act of repression and constitute a serious violation of the 1951 Refugee Convention and the Sudanese Asylum Act 2014,” said Ms. Fleming, reminding the Sudanese Government of its obligations under international law and the laws of the country. “We urge you to provide asylum seekers full access to procedures,” she said.

Asked by reporters whether this was the first time refugees had been expelled without hearing, Ms. Fleming said UNHCR was concerned this incident was indicative of a new trend of a large number of Eritreans just arriving and being sent back.

“This [may be] related to a new act by the Government of Sudan requiring foreign nationals to legalize their residency, which was causing huge concern among foreigners, including recognized refugees and asylum seekers, who were fearing arrest and deportation,” she added.

She went on to say that UNHCR did not have monitors on the ground in Eritrea, and there was no significant international presence there. Yet, “Eritrea is a country of concern - people leaving Eritrea are in need of international protection, as their lives would be in danger if they were to be returned,” she said.

UNHCR is meanwhile in contact with Sudanese immigration authorities, and is seeking access to the people who had been recently arrested. “UNHCR is providing legal advice to them and stepping up its efforts to put an end to forcible expulsions,” concluded Ms. Fleming. 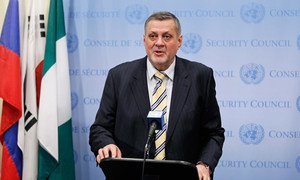 The United Nations mission in Afghanistan strongly condemned Saturday's targeted attack on Masoom Stanekzai, a government minister and the Head of the Secretariat of the country's High Peace Council.