UNAMI
Children in the Khazar IDP camp in the Kurdistan Region of Iraq.
4 July 2014

United Nations relief agencies and their partners working amid the ongoing turmoil and massive population displacement in Iraq are scaling up their healthcare responses, with a major polio vaccination campaign in Baghdad, and efforts to help relieve the “immense burden” on the existing healthcare system in Kurdistan.

Speaking to the press in Geneva today, Dan Epstein, spokesperson for the UN World Health Organization (WHO), said the agency and the UN Children's Fund (UNICEF) are cooperating on polio vaccination in Iraq.

“Sub-regional vaccination campaigns in Baghdad and two other Governorates have just been completed, and according to the monitoring of the Iraqi Red Crescent, 95.5 per cent of children under five had been reached,” he said, adding that a campaign had also been carried out in Ninewa Governorate districts, where more than 23,000 thousand children had received polio vaccines.

Mr. Epstein pointed out that activities in the Kurdistan region had been postponed due to logistical challenges, but the necessary doses of vaccines had been secured and delivered to the Ministry of Health.

“In general terms in Iraq, since the last outbreak of fighting, the WHO had provided medicine and medical supplies to more than 170,000 people in the Ninewa Governorate,” he continued, adding that WHO had also facilitated the air lifting of 15 tons of medicines and medical supplies.

The Ministry of Health of Kurdistan is working together with WHO on procuring necessary supplies which were currently missing in Kurdistan, including medicines for kidney failures, hypertension, diabetes, IV fluids and antibiotics.

“The issue of concern is that there are more than one million internally displaced persons, who are at increased risks of communicable diseases, including risks of polio, cholera, measles and tuberculosis,” Mr. Epstein said, underscoring the “immense burden” on the existing health system in Kurdistan.

Regarding communicable diseases, he said five suspected cases of measles have been recorded among internally displaced persons (IDPs) in Anbar, and water quality is being tested to reduce to the risk of diarrhoeal diseases. There is a risk assessment mission going to various IDP areas, and public health experts from the WHO have trained local health officials.

“WHO is working with Kurdish health authorities on an early warning electronic system; [our] goal is to cover 600 out of the 1,000 health facilities in Kurdistan,” Mr. Epstein concluded. 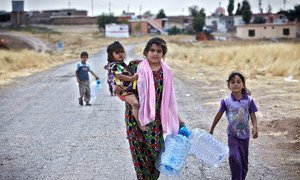 Amid reports of deliberate targeting of women and girls in Iraq, senior United Nations officials today voiced deep concern about the deteriorating humanitarian and security situations in the country, where more than 1.2 million people have fled their homes in fear for their lives.