West African countries and international health authorities at a United Nations-backed emergency summit have adopted a strategy covering a range or priorities, including strengthening cross-border collaboration, to combat the world's deadliest Ebola outbreak, which has killed hundreds of people in Guinea, Sierra Leone and Liberia.

The two-day Emergency Ministerial meeting on Ebola Virus Disease, convened by the UN World Health Organization (WHO) in Accra, Ghana, wrapped up with Health Ministers pledging to strengthen surveillance to detect cases of the virus, and boost local community engagement, among other priorities to rein in the unprecedented outbreak, with reports of more than 750 cases and 445 deaths in the affected countries since March.

Speaking at the closing session, the WHO Regional Director for Africa, Dr. Luis Sambo commended the Ministers, saying: “We have adopted an inter-country strategy to tackle this outbreak. It's time for concrete action to put an end to the suffering and deaths caused by Ebola virus disease and prevent its further spread.”

In a Communiqué issued at the end of the Meeting, the Ministers agreed that the current situation poses a serious threat to all countries in the region and beyond and called for immediate action. They expressed out concern about the adverse social and economic impact of the outbreak and stressed the need for coordinated actions by all stakeholders, national leadership, enhanced cross-border collaboration and community participation in the response.

In spite of the ongoing efforts to tackle the outbreak, there was consensus that a number of gaps and challenges remain. These relate to coordination of the outbreak, financing, communication, cross border collaboration, logistics, case management, infection control, surveillance, contact tracing, community participation and research.

WHO also notes that cultural practices and traditional beliefs which are contrary to recommended public health preventive measures are contributing “to a great extent” to the continued spread of the virus in the three affected countries.

In light of all this, WHO will establish a Sub-Regional Control Center in Guinea to act as a coordinating platform to consolidate technical support to West African countries by all major partners; and assist in resource mobilization. The delegates also underscored the importance of WHO leading an international effort to promote research on Ebola virus disease and other hemorrhagic fevers.

The Ministers adopted a common inter-country strategy which highlights priority actions for the affected countries, including convening national meetings involving key Government ministries, national technical committees and other stakeholders to map out a plan for immediate implementation of the strategy.

The delegates also urged partners to continue providing technical and financial support and work with WHO to effectively coordinate the response. In an effort to promote regional leadership and highlight the seriousness of the outbreak, they strongly recommended that the forthcoming Economic Community of West African States (ECOWAS) Heads of States summit addresses the issue of Ebola virus outbreak.

In March 2014 Guinea notified WHO about cases of Ebola virus Disease. The cases were initially confined to rural Guinea with the epicenter being Gueckedou. The agency says that what started as a rural outbreak has now spread to Conakry, the capital of Guinea, as well as cross border spread into Sierra Leone and Liberia. 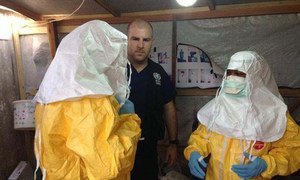 Urging health authorities in West African countries affected by the largest Ebola outbreak in history to “leave no stone unturned” in their efforts to contain the spread of the deadly virus, a United Nations World Health Organization (WHO) official today underscored the critical need to engage community, religious and opinion leaders in the region to be at the forefront of the response.