The UN Food and Agriculture Organization’s (FAO) price index- which measures monthly changes in the global price of a basket of meat, dairy, cereals, oils and fats, and sugar- averaged 206.0 points in June 2014, down 3.8 points (1.8 percent) from May and nearly 6 points (2.8 percent) below the June 2013 level.

It also found that the price of cereal, vegetable oils and dairy decreased further from its last published data in May, while the price of meat edged up, reflecting a constrained world supply.

The latest FAO Crop Prospects and Food Situation report noted improvement in the global production of cereal, a staple food in many countries. Total production in 2014 now stands at 2,498 million tons, 18 million tons up from 2013. The increase reflected improved production for coarse grains and wheat crops, particularly in the United States, the European Union and India.

Despite this good news, the agency warns that millions of people still face food insecurity due to conflict, crop failure and high domestic food prices. Some 33 countries, including 26 in Africa, are in need of access external assistance.

Conflict in the Central African Republic (CAR) continues to jeopardize crop production, which in 2013 declined by 34 percent from the previous year. Escalating conflicts and adverse weather in parts of Eastern Africa were threatening local people’s access to food.

In Somalia about 870,000 people are estimated to be in need of emergency assistance while in South Sudan, since the conflict began late last year, the number of people in need of food assistance jumped to 3.5 million.

Most recently, the report stated, an escalation of conflicts in Syria and Iraq have negatively impacted crop production, food security and access to drinking water. Conditions are likely to deteriorate. 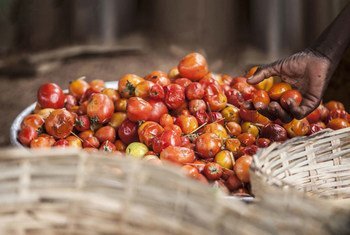 2 July 2014
A newly issued United Nations-backed expert panel report takes a close look at where and how food waste occurs and recommends a number of actions that could help reduce the 1.3 billion tonnes of food that are squandered worldwide each year.