FAO/Frank Nyakairu
An irrigation canal being reinforced near the Kabasa displacement site, outside Doolow in southern Somalia. The work is supported by the World Food Programme.
2 July 2014

In Somalia, the widespread food security crisis is set to deteriorate over the second half of the year, according to the UN Office for the Coordination of Humanitarian Affairs (OCHA). More than one million people are internally displaced and 875,000 people need urgent life-saving food assistance.

“Failure to act decisively to address humanitarian needs will not only lead to another humanitarian crisis but will also undermine the peace and State-building gains of the last two years, jeopardizing this rare window for Somalia to graduate from failed-State status,” said OCHA’s Director of Operations, John Ging.

“All the signs we saw before 2011’s severe famine are here – reduced humanitarian access, insecurity, increasing food prices, delayed rains and rapidly worsening malnutrition among children. It is vital that we act now to avert another disaster.”

Mr. Ging was part of a group of emergency directors from UN humanitarian agencies and partner organizations that visited Somalia and Yemen last week.

Briefing reporters in New York on the visits, he noted that underfunding was a critical concern for the humanitarian response. For example, the $933 million humanitarian appeal for Somalia is only 25 per cent funded.

Children are among those most in need, Ted Chaiban, Director of Emergency Programmes for the UN Children’s Fund (UNICEF), told the briefing, pointing out that there are 200,000 children in Somalia who are severely malnourished.

“The protocol, the systems to treat those children are available, as is the access to a significant extent, but the resources are not there. So it’s very important that we do everything to arrest any further deterioration of the situation from a humanitarian standpoint,” he stressed.

In Yemen, Mr. Chaiban noted, the sheer numbers of children suffering from life-threatening or debilitating forms of malnutrition are even greater due to chronic underdevelopment and persistent insecurity.

“One in five Yemeni children is underweight, 58 per cent are stunted. After Afghanistan, Yemen has the second highest level of chronic malnutrition,” he said, adding that other protection concerns include keeping children in school, as well as reducing child marriage and child labour.

Overall, there are 14.7 million people in need of humanitarian assistance in Yemen – or 58 per cent of the population; 10.5 million of them are food insecure; and there are 320,000 registered internally displaced persons. The country is also plagued by ongoing instability, lacks basic social services and is on “the brink of economic collapse,” warned the two officials.

“This is one of the largest humanitarian challenges in terms of scale and scope that we face in the world. It is extremely fragile there at the moment,” said Mr. Ging.

“The humanitarian response is not the solution for Yemen. Yet, the humanitarian component of the international intervention is the one that’s having to pick up the pieces most immediately.”

Adding to the country’s woes, said Mr. Ging, is the “curse of khat,” a drug that is undermining health as well as the economy and development of Yemen. He stressed the need for a plan to address this scourge, noting that 70 per cent of the water resources are estimated to be used for the growing of this drug.

Despite the constraints, he went on to highlight the important humanitarian work that is being carried out in Yemen. One million people are in receipt of food assistance; 300,000 people have received nutritional support; 200,000 have benefited from water and sanitation support; 1.5 million are receiving health care support; and 400,000 vulnerable and conflict-affected people are receiving protection services.

At the same time, he warned that underfunding is jeopardizing the capacity to respond, noting that the $529 million humanitarian appeal for Yemen is only 33 per cent funded.

“Despite the extremely challenging conditions in both Somalia and Yemen, we saw at first hand the excellent, life-saving work that our humanitarian partners are able to do when funding is available, putting their own lives in danger to reach those who need assistance most,” Mr. Ging said.

“I urge donors to help us build on the gains made in both countries. If we fail to act now setbacks are inevitable, which could have repercussions well beyond Somalia and Yemen.” 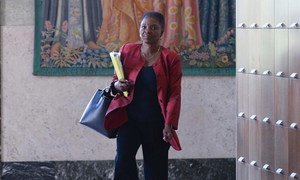 As the number of people in need of humanitarian assistance worldwide continues to grow, the top United Nations relief official today urged the international community to provide the requisite funding and access needed to enable aid workers to do their jobs effectively.