The death penalty has no place in the 21st century, United Nations Secretary-General Ban Ki-moon declared today, calling on all States take concrete steps towards abolishing or no longer practicing this form of punishment.

“Together, we can finally end this cruel and inhumane practice everywhere around the world,” said Mr. Ban in opening remarks to the special event “Best practices and challenges in implementing a moratorium on the death penalty,” co-organized at UN Headquarters by the Office of the UN High Commissioner for Human Rights (OHCHR) and the Permanent Mission of Italy to the UN.

At today’s event, which was moderated by Assistant Secretary-General for Human Rights Ivan Šimonovic, Mr. Ban noted that the Assembly will soon take up the resolution again. The efforts generated by the text have won a progressively broader margin of support from Member States, representing a variety of legal systems, traditions, cultures and religious backgrounds.

“[Yet], I remain very concerned, however, about shortcomings with respect to international human rights standards in countries that still apply the death penalty,” he said, adding that he is particularly troubled by the application of the death penalty for offences that do not meet the threshold under international human rights law of ‘most serious crimes,’ including drug-related offences, consensual sexual acts and apostasy.

The UN chief went on to express concern about legislation in 14 States that permits the death penalty on children as well as the new phenomenon of sentencing large groups of individuals to death in mass trials.

Against such a backdrop, he said that over the past two years, OHCHR has convened a series of important global panel events on the death penalty, focusing on wrongful convictions, deterrence and public opinion, and discrimination. Specifically, discriminatory practices in the imposition of the death penalty further reinforce the calls for its universal abolition.

Looking ahead to the next session of the General Assembly, he therefore called on all States to take action in three critical areas: ratify the Second Optional Protocol of the International Covenant on Civil and Political Rights aiming at the abolition of the death penalty; support the resolution on the moratorium on the use of the death penalty; and take concrete steps towards abolishing or no longer practicing this form of punishment.

♦ Receive daily updates directly in your inbox - Subscribe here to a topic.
♦ Download the UN News app for your iOS or Android devices.
death|penalty 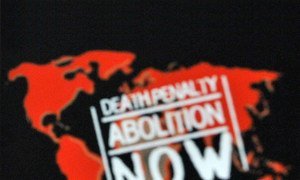