2 July 2014
Concerned by recent allegations against the United Nations-African Union peacekeeping force in Sudan’s Darfur region, Secretary-General Ban Ki-moon has called for a review of related investigations and reviews over the last two years to determine what, if any, corrective action needs to be taken.

A statement from his spokesperson said Mr. Ban has instructed the UN Secretariat to review the reports of all investigations and inquiries related to the hybrid operations, known as UNAMID, undertaken since mid-2012 to ensure that the recommendations have been implemented and that any relevant issues have been fully addressed. The review is to be completed within one month.

“The Secretary-General remains committed to improving UNAMID’s performance and is determined to take all necessary steps to correct any wrongdoing,” the spokesperson said.

UNAMID has undergone several investigations and reviews, according to the spokesperson, which have sought to address both strategic issues and specific incidents related to its performance.

In his special report to the UN Security Council on 25 February, Mr. Ban wrote that “there is a strong need and much potential for UNAMID to improve across the full spectrum of its work if the key challenges to mandate implementation are addressed.”

The statement issued today said the report provides an overview of the strategic and managerial challenges faced by the Mission, and the UN work being done to address them.

The recent allegations against the Mission, which Mr. Ban calls “serious,” cover a wide range of issues, including inaccurate reporting of the facts on the ground in Darfur, specific instances of failure to protect civilians and accusations of mismanagement in the Mission, according to the statement.

In June, during her briefing to the Security Council, the Prosecutor of the International Criminal Court (ICC) Fatou Bensouda drew the Council’s attention to allegations that UNAMID’s report had been subject to manipulation, with the intentional effect of covering up crimes committed by the Sudanese Government.

Those allegations call for “thorough, independent and public enquiry,” Ms. Bensouda said, noting that while the responsibility for this manipulation may lie with a handful of individuals, it impugns the credibility of the Mission as a whole and deprives advocates of peace and justice of an essential tool for evaluating the ever evolving situation in Darfur.

UNAMID, formally established in 2007, has been mandated to protect civilians, contribute to humanitarian assistance, monitor and verify implementation of agreements, contribute to the promotion of human rights and the rule of law, and assist in the political reconciliation following the 2003 civil war between the Government of Sudan and militias and other armed rebel groups. 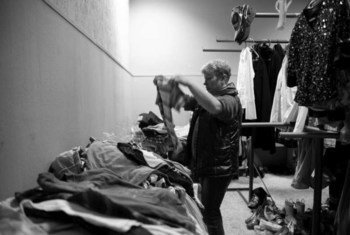 18 June 2014
With United Nations monitors reporting today that armed separatists have used killings, abductions and torture to instil a “climate of intimidation and fear” in eastern Ukraine, the world body’s human rights chief urged all armed groups to put down their weapons, end the violence and begin the process of long-term reconciliation.