UNHCR/S. Baldwin
An Iraqi woman from Mosul holds her daughter in one hand and empty water containers in the other. Two other children follow her in search of water near the Garmava temporary camp in central Iraq.
2 July 2014

Amid reports of deliberate targeting of women and girls in Iraq, senior United Nations officials today voiced deep concern about the deteriorating humanitarian and security situations in the country, where more than 1.2 million people have fled their homes in fear for their lives.

“As the security situation continues to worsen, I am extremely worried about the families urgently in need of water, food, shelter, healthcare, sanitation and protection from violence,” said Valerie Amos, Under-Secretary-General for Humanitarian Affairs and UN Emergency Relief Coordinator.

That includes targeting of women and children, who have reportedly been kidnapped, raped and forcibly married to militants of the Islamic State of Iraq and the Levant (ISIL/ISIS) and other armed groups.

Phumzile Mlambo-Ngcuka, Executive Director of UN Women, expressed deep concern yesterday following the reported suicides of some women who had been raped, and of men who had been forced to watch the rape of their wives and daughters.

“UN Women strongly condemns sexual and gender-based violence, and calls on all parties to address such reports and protect the rights of Iraqi women and girls,” she said.

Ms. Mlambo-Ngcuka said such targeting is “a grave violation of human rights” and warned against the risk of growing extremism to women’s rights in the region and worldwide.

An estimated 20,000 women and girls in Iraq are at an increased risk of sexual violence as a result of the mounting crisis in the north and west, the UN Population Fund (UNFPA) said earlier this week.

The agency also noted since this latest violence erupted three weeks ago in northern Iraq, of the approximately one million people displaced by the crisis, some 250,000 women and girls – including nearly 60,000 pregnant women – are in need of urgent health care.

In total, more than 2.2 million people are now displaced in Iraq, including one million people already seeking refuge in Iraq as a result of the Syrian conflict and previous conflicts.

The bulk of them have fled to the autonomous Kurdish region, where UN agencies are doing their best to support the humanitarian response despite continued finding and ongoing security constraints, Ms. Amos said, adding: “But we have struggled to raise the funds required.”

To that end, she echoed UN Secretary-General Ban Ki-moon’s gratitude to the Government of Saudi Arabia, which yesterday donated $500 million towards the humanitarian effort.

More than 2,417 Iraqis were killed last month and another 2,287 were injured in acts of terrorism and violence, according to the UN Assistance Mission in the country (UNAMI) human rights team.

Mr. Ban and senior UN officials have called for the immediate formation of an inclusive Government in the country and for all sides to take immediate steps to protect civilians. 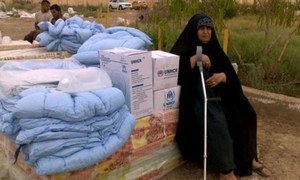 Iraq’s violent insurgency has claimed some 2,400 lives – more than half of them civilians – a “staggering number”, declared the top United Nations envoy there, as he called on all Iraqi leaders to work together to foil attempts to rip apart the country’s social fabric.