To achieve a sustainable transition by 2050, when more than nine billion people will live on Earth, there needs to be significant adjustment to the current patterns of consumption and production, delegations heard today as a United Nations high-level political forum considered a new report aiming to lay the foundation for a new global sustainable development agenda.

The “prototype” Global Sustainable Development Report, created by the UN Department of Economic and Social Affairs, looks three generations back — from 1950 to 2013 — and 40 years into the future to 2050, to learn from what was tried, in order to put economies and societies on the path of sustainable development.

“To date, there exists no comprehensive and authoritative report that brings together the range of existing assessments of global sustainable development, reviews global progress and future pathways in an integrated way, taking into account the perspectives of scientific communities across the globe,” said Under Secretary-General of Economic and Social Affairs, Wu Hongbo, at the launch of the report.

The Report aims to make the findings of a wide range of scientific assessments available to policymakers and delegations gathered for the first meeting of the UN High-level Political Forum currently meeting in New York under the auspices of the Economic and Social Council, as they prepare to lay the foundation for a new set of sustainable development goals to follow the 2015 deadline for the Millennium Development Goals (MDGs) and new challenges. The new agenda is expected to me adopted in September 2015.

The current report is meant to help policymakers as they deliberate the scope and methodology of future global development sustainable reports.

Among the findings, the report authors said that historical progress towards sustainable development has been mixed. The world has managed to feed, nurture, house, educate and employ on the order of an additional 800 million people every decade from 1970 to 2000, and even 1.1 billion people in the 2000s, it reports. In the past 12 years alone, there have been cities built to house 770 million people, equivalent to 93 New York cities – more than in any decade before.

“Yet, we have not managed to employ our much greater wealth and technological capacity to eliminate poverty and hunger,” they wrote, noting that 850 million people today remain food insecure.

In addition, the world is still making insufficient progress in a number of areas including reducing deforestation, providing sustainable energy for all, protecting the oceans, providing decent work for all, and achieving gender equality, among others.

The report, which is the outcome of expert group meetings and informal networks of scientific contributors, was produced on official statistics and so-called 'big data,' which uses information from sources such as satellite images, cell phones and online sites.

During its preparation, authors pointed out data gaps as a result of scarcity and inconsistency in measuring and monitoring progress.

In his remarks, Mr. Wu highlighted the use of flexible national assessment frameworks, similar to the MDGs, which might be useful in the future.

Among other issues highlighted in the report is the estimated range of global investment needed to achieve a sustainability transition, and the importance of international cooperation to share environmentally sound technologies. 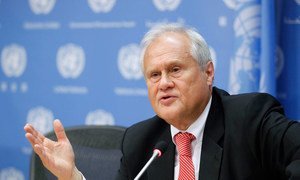