The rights of children are being violated in conflict situations with total impunity, a United Nations official said today, as she presented a report on grave abuses committed against children in places such as Iraq, Syria, South Sudan, Nigeria and the Central African Republic (CAR).

“What is common to most of these conflict situations is that child rights are violated in total impunity,” said Leila Zerrougui, the Secretary-General’s Special Representative on Children and Armed Conflict. “If we are serious about protecting children, we must demand accountability.”

The Secretary-General’s annual report on children and armed conflict shows that children were recruited and used, killed and maimed, victims of sexual violence and other grave violations in 23 country situations last year.

It has documented the cases of children recruited and used by 7 national armies and 50 armed groups fighting wars in the CAR, South Sudan, Syria, and in 11 other countries, according to a news release on the report.

A new party appearing on the Secretary-General’s list of perpetrators is the extremist group Boko Haram, responsible for “unspeakable violence against children” in Nigeria, including killing and maiming as well as attacks against schools and hospitals.

The report also notes that the recruitment of children in the CAR was “systematic” and child rights violations were committed by all parties to the conflict in total impunity.

“In 2014, the children of CAR continue to face unspeakable violence, a deadly mix of attacks and retaliation motivated by religion, a worsening humanitarian crisis and complete lack of law and order continues to plague the country,” Ms. Zerrougui told reporters at UN Headquarters as she presented the report.

“There is an urgent need to break the climate of impunity to serve as a deterrent to the ongoing violence.

Syria, where the UN documented widespread violations in 2013, continues to be an “extremely dangerous place to be a child,” she continued. The Secretary-General, she noted, has identified and listed four new parties for recruitment and use of children, and in two cases, for killing and maiming of children in Syria.

In South Sudan, the conflict that erupted six months ago erased most of the progress achieved to protect children since the country’s independence.

“What we are expecting now is that both the Government and the opposition translate their commitments to effective implementation to end the violations that are affecting children,” she stated.

The new crisis in Iraq is taking an “extremely worrying turn,” with the recent advances by the Islamic State of Iraq and Syria (ISIS/ISIL) having created a volatile and dangerous situation for children. The Special Representative’s office is receiving disturbing reports of recruitment and other grave violations against children that require immediate action.

The report also points out that attacks against schools and hospitals are on the rise, including in Afghanistan, CAR, Democratic Republic of the Congo, Iraq, Nigeria and Syria.

Ms. Zerrougui noted that there is progress to report as well. No violations were recorded in Chad in 2013 and the country national army has fulfilled all the requirements of its action plan and is no longer on the list for recruitment and use of children. 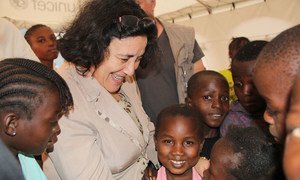