An estimated 20,000 women and girls in Iraq are at an increased risk of sexual violence as a result of the mounting crisis in northern and western parts of the country, warned the United Nations today, urging immediate action to ensure their protection.

An estimated 20,000 women and girls in Iraq are at an increased risk of sexual violence as a result of the mounting crisis in northern and western parts of the country, warned the United Nations today, urging immediate action to ensure their protection.

“We must act immediately to ensure that women and girls are protected from sexual violence,” said Executive Director of the UN Population Fund (UNFPA), Babatunde Osotimehin, stressing that the international community must not wait for cases to be counted and documented in detail ”before we act.”

The agency also noted since this latest violence erupted three weeks ago in northern Iraq, of the approximately one million people displaced by the crisis, some 250,000 women and girls – including nearly 60,000 pregnant women – are in need of urgent health care.

Some 1,000 of those pregnant women are predicted to face life-threatening complications, UNFPA estimates. And with critical shortages in health supplies and staff, access to maternal health services could decline, and the number of unassisted childbirths is expected to rise.

In Erbil, which is seeing an influx of displaced people from Mosul and neighbouring cities, the maternity hospital found that its needs have doubled since the beginning of the crisis, with more than 50 normal deliveries and up to 20 Caesarean sections taking place every day.

“Women were being discharged from the hospital only three hours after delivery,” UNFPA said in a statement.

The agency also provided the Erbil hospital with reproductive health and delivery kits containing enough supplies to provide emergency obstetric care for up to 1,200 deliveries. But these kits will only meet needs for a few weeks.

In the Dohuk Governorate, UNFPA distributed dignity kits to more than 2,000 women and girls in camps and host communities. The UN is also supporting the creation of safe spaces for women and services to address gender-based violence.

Meanwhile, in Khazar camp outside of Mosul, where humanitarian agencies estimate hundreds of families are seeking shelter, UNFPA deployed social workers to support the needs of pregnant women. 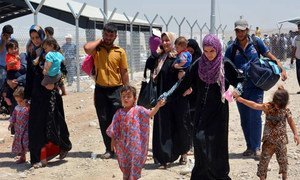 Secretary-General Ban Ki-moon today expressed his grave concern at the deepening crisis in Iraq and the rising number of civilian deaths and injuries, with over one million Iraqis having fled their homes due to the fighting.