The United Nations agency charged with ensuring the well-being of Palestinian refugees across the Middle East has warned today that, despite reports of a truce between the Syrian Government and armed groups inside Yarmouk camp, it is still unable to carry out humanitarian operations there.

“It is now a month since we last distributed aid inside the camp,” Chris Gunness, spokesperson for the UN Relief and Works Agency for Palestine Refugees in the Near East (UNRWA), said in a news release yesterday. “Following reports of a 21 June agreement… inside Yarmouk, UNRWA is urgently seeking the resumption and expansion of its humanitarian activities inside [the camp], where conditions remain dire for the 18,000 civilians trapped there.”

He said the agency stands ready to implement a rapid humanitarian response so that the immediate and longer-term needs of the civilians of Yarmouk can be met.

“UNRWA will continue to advocate for continuous, substantial and safe humanitarian access to Yarmouk, and to ensure the protection of Palestinian and Syrian civilians,” Mr. Gunness said.

Prior to the armed conflict in Syria, which began in March 2011, Yarmouk, on the outskirts of Damascus, was home to over 160,000 Palestine refugees. Since December 2012, fighting has caused at least 140,000 Palestine refugees to flee their homes in Yarmouk, as armed opposition groups established a presence in the area, with Government forces controlling the periphery. 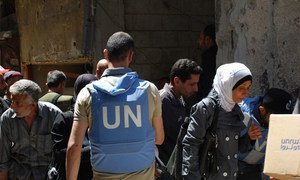 Following a reported ceasefire in the besieged Yarmouk camp in Syria, the United Nations agency that administers aid to Palestinian refugees across the Middle East said it is ready to resume and expand its humanitarian activities as soon as it has access to the site.