Secretary-General Ban Ki-moon today expressed his grave concern at the deepening crisis in Iraq and the rising number of civilian deaths and injuries, with over one million Iraqis having fled their homes due to the fighting.

Mr. Ban “is deeply troubled by persistent reports of violations of human rights and international humanitarian law taking place in Iraq,” a United Nations spokesperson said in a statement.

These include summary execution of captured soldiers and detainees, indiscriminate shelling of civilian areas, and the abduction and murder of members of ethnic and religious communities.

In a recently released report, the UN Assistance Mission in the country (UNAMI) and the UN Human Rights Office (OHCHR) cited alleged abuses by both the Iraqi Security Forces and the armed group Islamic State of Iraq and the Levant (ISIL/ISIS). The militants have purportedly posted more than a dozen videos showing beheadings and shootings of hors combat soldiers and police officers, as well as apparent targeting of people based on their religion or ethnicity, including Shia and minority groups such as Turcomans, Shabak, Christians, and Yezidis.

In today's statement, Mr. Ban also urged authorities to hold accountable any members of the Iraqi Security Forces or local militias who may have committed violations of international humanitarian or human rights law.

“The Secretary-General calls on all parties to the conflict ensure that persecution of civilians based on their religion or ethnic background cease immediately,” his spokesperson said.

Mr. Ban added that all parties to the conflict – whether armed groups, ISIL, local militias or Iraqi Security Forces – have the legal obligation and moral responsibility to avoid and prevent violence against civilians and ensure that their humanitarian needs are addressed.

Overall, at least 1,300 people were killed in Iraq, and another 1,250 injured since 5 June in fighting in Nineveh, Salah al-Din and Diyala alone, according to UNAMI and OHCHR. At least 900 of the people killed were civilians.

In addition, an estimated 1.2 million Iraqis have been displaced by fighting, including from Anbar and Ninewa governorates, according to the UN Refugee Agency (UNHCR).

The Secretary-General commended UNAMI's continued efforts to assist in the settlement of the current conflict in Iraq, to monitor and report on human rights violations, and to support national and international humanitarian partners in providing assistance to those in need.

In Baghdad, Mr. Ban's Special Representative for Iraq, Nickolay Mladenov, today urged the new Parliament to immediately engage in addressing the political, security, social and humanitarian concerns of all communities in Iraq.

“Faced with a national crisis, the political leaders of Iraq should put the interests of the country and its people before everything else,” Mr. Mladenov said ahead of Tuesday, when the newly elected Council of Representatives is expected to convene its first meeting.

“The first and most important step is the election of a Speaker,” Mr. Mladenov said in a statement.

He added that once this is done, the Parliament should promptly elect a President and approve a new Government, as stipulated in the Constitution.

“Any delay in the process, caused by a lack of quorum or unwillingness to show compromise will be detrimental to the country's future,” Mr. Mladenov cautioned. 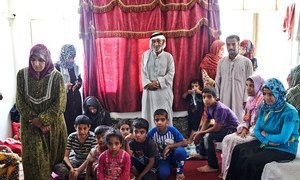 The “grave” situation in Iraq requires a solution based on military, political and social processes that will address the concerns of all communities, the top United Nations official in the crisis-torn country said today, appealing also for financial resources to aid the already-overstretched UN relief effort there.