Secretary-General Ban Ki-moon today adopted a lion cub in Nairobi National Park as a sign of support for efforts against the trafficking of animals around the world, following a week of high-level United Nations discussions on the environment.

“I adopted this lion cub with the hope that all human beings and animals can live in peace and harmony,” Mr. Ban told reporters in the Kenyan capital. “Human beings should know how to live harmoniously with our Mother Nature.”

Mr. Ban also said he adopted the six-month old cub, whose Kiswahili name Tumaini means “hope”, to show solidarity for the preservation efforts of the Kenyan people, and as a token of his concern for the Kenya Wildlife Service and park rangers.

“Wildlife crime is not simply a threat to animals,” Mr. Ban said. “With its links to organised crime and even insurgent groups, it is a major security issue.”

During a meeting this afternoon with Kenyan President Uhuru Kenyatta, Mr. Ban discussed international terrorism and security issues, particularly how the UN and the Kenyan Government can work together to reinforce and enhance the capacity of Kenyan security forces.

Noting also the continued abduction of Nigerian school girls, Mr. Ban said terrorism must be addressed comprehensively: “Not one single country or one single organization can handle this on its own. We have to have unity and solidarity among nations.”

Last night, Mr. Ban attended the closing ceremony of the inaugural UN Environment Assembly (UNEA), which addressed illegal wildlife trafficking, as well as sustainable consumption and production, the green economy, and the links between environment, poverty and human well-being.

The first session of the UNEA concluded after five days with 16 decisions and resolutions and a ministerial outcome document to encourage international action on major environmental issues.

Climate change was a common theme in many discussions, Mr. Ban said, and will remain a top priority ahead of next year's discussions towards a global deal on climate change at the Climate Change Conference in Paris in 2015.

To mobilize political momentum and catalyse ambitious action on the ground, Mr. Ban will convene a climate summit on 23 September in New York for leaders from Government, business, finance and civil society.

“To get the world on a trajectory to limit global temperature rise to less than 2 degrees Celsius, we need more large-scale projects such as Kenya is backing,” Mr. Ban said, noting the country's innovative development with solar, wind and geothermal renewable energy projects.

More than 1,200 high-level participants, including UN officials, diplomatic and civil society delegations, participated in the historic first session of the UNEA, held under the theme “A Life of Dignity for All.”

The body, created in answer to a call made by governments at the 2012 UN Conference on Sustainable Development (Rio+20) for a more representative entity dealing with the issue, includes all 193 UN Member States sitting alongside major stakeholders. UNEA now plans to meet every two years, and will replace the Governing Council of the Nairobi-based UN Environment Programme (UNEP).

Annan notes achievements in protected areas, but says success is not guaranteed 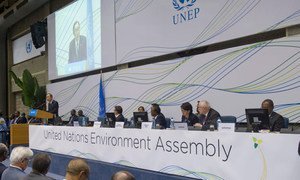 With the close of the Millennium Development Goal era just months away, and work already beginning on a successor agenda to reign in poverty and put the planet on a sustainable course before it is too late, Secretary-General Ban Ki-moon said today the “timing could not be better” for the launch of a strong UN body tackling all issues relating to the environment.