WHO/Chris Black
A nurse comforts a patient who has been diagnosed to have the Ebola virus.
27 June 2014

The United Nations health agency and partners are working with the Governments of Guinea, Liberia and Sierra Leone to control an outbreak of Ebola in West Africa, an official today said, announcing an international meeting next week to agree on a coordinated regional response.

“The situation is not out of hand,” Pierre Formenty told journalists in Geneva on behalf of the UN World Health Organization (WHO). “WHO has been supporting the three affected countries and their Ministries of Health staff, and are working with them on a daily basis to try to contain the outbreak.”

Those Ministers will meet in Accra, Ghana, next week to agree on a “comprehensive operational response” to control the Ebola virus, which has been reported in more than 600 cases since March, and over 390 deaths.

There are difficulties, notably in the forests, in identifying cases and tracing the point of contact, Dr. Formenty said.

“WHO has not yet managed to explain to people the dangers to their lives in conducting an unsafe funeral during an Ebola outbreak, and it continues to work to rectify that,” he added, highlighting the challenges of educating people about the infection.

The Ebola virus, which causes severe haemorrhaging and can kill up to 90 per cent of those infected, is spread by direct contact with the blood and body fluids of infected animals or people.

“To be effective, WHO has to continue a dialogue with the population, the affected families and the patients to make them understand the mode of transmission of the disease,” said Dr. Formenty, “and how to change their behaviour in order to stop the chain of transmission and the outbreak.”

The agency has stressed that any response to the outbreak must fully respect people’s human rights, and said they would not advocate for restrictions to stop people traveling from one place to another. 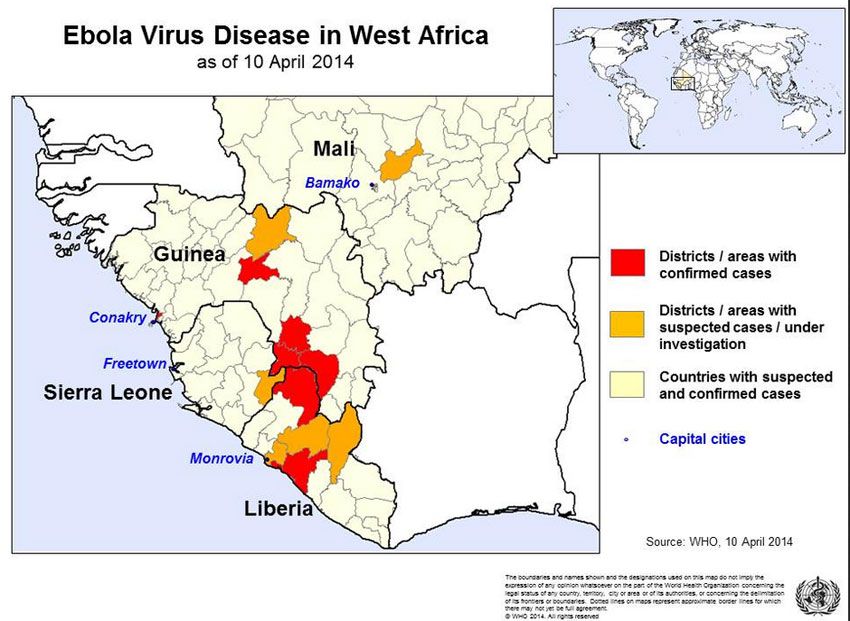 “If restrictive measures are imposed, it would only fuel the outbreak,” Dr. Formenty said. He added WHO was more in favour of “dialogue with affected families, cities and districts rather than to be a sort of ‘sanitary police’.”

In Guinea, 386 cases of the disease had been reported, including 280 deaths; 78 deadly cases out of 176 reported in Sierra Leone, and 63 reported cases in Liberia, including 41 deaths, WHO announced.

The number of suspected and confirmed cases of Ebola (EVD) in Guinea has jumped from 103 to 122 in just three days, with 80 confirmed deaths, said the United Nations World Health Organization (WHO), which will now focus on preventing further transmissions of the often fatal disease.