With the close of the Millennium Development Goal era just months away, and work already beginning on a successor agenda to reign in poverty and put the planet on a sustainable course before it is too late, Secretary-General Ban Ki-moon said today the “timing could not be better” for the launch of a strong UN body tackling all issues relating to the environment.

“We are now poised for the crucial next phase of human development – a universal post-2015 sustainable development agenda. That agenda needs a strong voice for the environment,” Mr. Ban said in his address to the closing session of the UN Environment Assembly (UNEA), which held its inaugural meeting this week in Nairobi, Kenya.

More than 1,200 high-level participants, including UN officials, diplomatic and civil society delegations, have been taking part in the historic first session of the Environment Assembly, being held under the theme “A Life of Dignity for All.”

The body, created in answer to a call made by governments at the 2012 UN Conference on Sustainable Development (Rio+20) for a more representative entity dealing with the issue, includes all 193 UN Member States sitting alongside major stakeholders. The Environment Assembly now plans to meet every two years and will replace the Governing Council of the Nairobi-based UN Environment Programme (UNEP).

“With its augmented role as a subsidiary organ of the UN General Assembly, UNEA has the mandate and capacity to position the environment alongside peace and security, poverty reduction, global health, trade and sustainable economic growth as an issue of crucial importance to every government,” said Mr. Ban.

At UNEA this week, stakeholders deliberated on many important topics – including the sustainable development goals, consumption and production patterns, the environmental rule of law, and the illegal trade in timber and wildlife. “The message is clear: protecting humanity’s life support system is integral to sustainable development. And it is a duty for all,” the UN chief declared.

He went on to say that UNEP and the UNEA have a central role to play in the coming months and beyond, as 2015 marks the deadline for the Millennium Development Goals (MDGs) and subsequently, the UN will a launch post-2015 sustainable development agenda. It is also when Member States have pledged to sign a meaningful new global climate agreement.

“The air we breathe, the water we drink and the soil that grows our food are part of a delicate global ecosystem that is increasingly under pressure from human activities,” said Mr. Ban, and as such, the decisions that will be made over the coming months will have profound implications for this generation and many to come.

Noting that the “heavy hand” of humankind is now visible everywhere – from tropical deforestation to depleted ocean fisheries and from growing freshwater shortages, and the rapid decline of biodiversity to the growing menace of climate change – he recalled that on 23 September, he will convene a climate summit meeting in New York to mobilize political will and catalyze ambitious action on climate change.

“I urge you all to ensure that your Heads of State and Government and your leaders from business and civil society attend. We need all sectors and all nations to work together to combat climate change and promote sustainable development,” declared the Secretary-General.

Emphasizing that decisive action is needed “to change humanity’s relationship with our planet,” he said: “This forum has the power – and the responsibility – to promote a global transformation of attitude and practice.”

Yet he stressed that the UNAE’s job will not be easy, “as there are many vested interests and entrenched attitudes that will stand in your way. You will have to advocate hard with your counterparts in finance, energy, agriculture and trade.

“But whenever you need inspiration, just look at the advances of the past four decades; the arguments for environmental sustainability are compelling – and they are winning, in the minds of people, in boardrooms and in the corridors of power,” said Mr Ban, telling the Assembly: “Change is in the air. Solutions exist. It’s time to lead.” 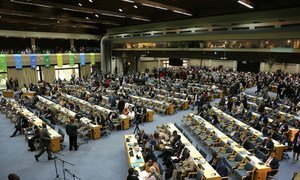 A United Nations body that focuses on the environment and has representatives from all 193 UN Member States is meeting for the first time today in Nairobi, to discuss issues such as illegal wildlife trade, chemical waste and air pollution, and new universal development goals.