The United Nations today expressed concern about the continuing human rights violations reportedly taking place in Venezuela and reiterated its call on authorities to respect the rights of peaceful demonstration and assembly.

According to the Office of the UN High Commissioner for Human Rights (OHCHR), national and international human rights organizations have recently published reports of violations, including purported attacks by security forces and armed groups on university premises and violent detentions of young people who are sometimes cut off from lawyers and families.

“Given the seriousness of these latest reports, we urge the Venezuelan authorities to undertake prompt investigations into these allegations and to ensure that those found responsible are brought to justice,” OHCHR spokesperson, Rupert Colville, told journalists in Geneva. He underscored that the Office is prepared to assist those efforts.

National human rights organizations estimate that more than 3,120 people were detained between February and May 2014. While most were detained for only short periods, the Attorney-General has confirmed that 174 individuals remain in detention, including 17 university students.

In addition, since mid-February, national organizations counted at least 51 attacks on university premises, by security forces and by groups of armed civilians.

“The High Commissioner has on several occasions urged the authorities to respect the rights to peaceful demonstration and assembly,” the spokesperson said on behalf of Navi Pillay. “She has also unequivocally condemned all violence by all sides, including the excessive use of force by security officials.” 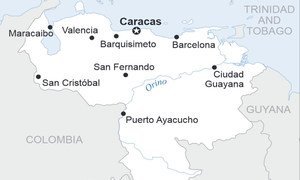 The United Nations human rights office today voiced concern at renewed violence in Venezuela, and at the reported excessive use of force by the authorities in response to protests.