Secretary-General Ban Ki-moon today announced the start of the global celebration of the 70th anniversary of the United Nations, which will aim to honour the historic breadth of the Organization’s development, security and human rights work, and ultimately, unite the international community in common cause to enable a strong UN to realize a better world.

In his address earlier today to the African Union Summit in Malabo, Equatorial Guinea, Mr. Ban noted that on this day, 69 years ago, the UN Charter was signed in San Francisco. Over the next 16 months, the Organization will commemorate the 70th anniversary of the UN’s founding in 1945. Of the 51 original members of the UN, only four were from Africa.

“Today, each of you is a member, including the Organization’s youngest. The issues which the UN has addressed most successfully, which include decolonization, apartheid, and development, are deeply connected to this continent,” said Mr. Ban, touching on but a few of the Organization’s successes.

The sixteen month commemoration will culminate on the 70th anniversary of the entry into force of the UN Charter – 24 October 2015 – the day now celebrated as United Nations Day. The Charter came into force on this late October day in 1945, when China, France, the Soviet Union, the United Kingdom, the United States and a majority of the other signatories filed their instruments of ratification.

We the Peoples of the United Nations, the opening words of the Charter, became a reality just four months after the signing of the Organization’s founding document, on 26 June 1945, which was held in the auditorium of the Veterans’ Memorial Hall in San Francisco.

The “UN70” celebration aims to unite Member States, global civil society and the many individual women and men working in common cause to enable a strong UN to realize a better world.

As the Secretary-General remarked earlier this month, “the year 2015 is a once-in-a generation opportunity. Our goal is to put people at the centre and protect our one and only planet. Our duty is to end poverty, leave no one behind and build lives of dignity for all.”

The first in a series of celebratory events will kick off tomorrow at UN Headquarters in New York, as a youth forum brings together winners of an international contest where university students were asked to write an essay on global citizenship in an official language of the United Nations that was not their mother tongue or medium of instruction.

Organized by the United Nations Academic Impact in the Department of Public Information, in collaboration with ELS Educational Services, the Forum will convene in the General Assembly Hall at 10 am. 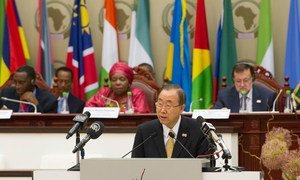 The United Nations is proud to be a key partner with Africa, Secretary-General Ban Ki-moon told continental leaders gathered for a summit in Equatorial Guinea today, underscoring the Organization’s commitment to working with them to resolve and prevent conflict, as well as to enhance agricultural productivity, promote industrialization and ensure gender equality.