Around the world, a “pandemic of violence” and repression threatens to push back hard-won human rights for women and girls, the head of UN Women said today as she declared that the United Nations is taking its campaign to promote gender equality “outside our offices to the community and people, where it will always belong.”

Phumzile Mlambo-Ngcuka, Executive Director of UN Women, made those remarks as she briefed reporters at UN Headquarters on the campaign kicking off a year-long, worldwide commemoration of the 20th anniversary of the landmark Fourth World Conference on Women in Beijing.

“The Apollo itself has long been at the heart of community struggle and bold activism. We also know that the vision laid out in Beijing still resonates deeply around the world because much of what was agreed there has not been achieved,” she said, drawing attention to the “unfinished business” of reducing women’s share of poverty, increasing their participation in peace and security, and protecting and promoting the human rights of all women and girls .

“So today, we are reaching out to people of the world to draw attention to the unfinished business of the Beijing Platform for Action,” Ms. Mlambo-Ngcuka said. “Gender-sensitive indicators have to be embedded in the DNA of all targets and goals post-2015,” she added, referring to the ongoing work of UN Member States to craft a successor agenda for the landmark Millennium Development Goals (MDGs).

As part of UN Women’s campaign, planned events will focus on achievements and gaps in gender equality and women’s empowerment since 189 Governments adopted the 1995 Beijing Declaration and Platform for Action, which is meant to pave the way for women’s full and equal participation in all spheres of life and decision-making.

Ms. Mlambo-Ngcuka noted other locations where campaign events will be held, ranging from Kigali, Rwanda, where the focus will be on women’s economic empowerment, to New Dehli, India, where men and boys will be the focus as partners in the push for gender equality.

The Beijing women’s conference drew an unprecedented 17,000 participants, while 30,000 representatives attended the NGO [Non-Governmental Organization] Forum. In 2015, the UN will assess progress on implementation of the Beijing action plan over the past 20 years, based on national reports currently being prepared by UN Member States.

The formal commemoration of the 20th anniversary will take place during the 59th session of the UN Commission on the Status of Women (CSW), and International Women’s Day 2015 will be dedicated to Beijing+20. A high-level commitment meeting is expected in September 2015.

“We want to emphasize that the Beijing agenda is not a women’s agenda, it is an agenda for humanity,” Ms. Mlambo-Ngcuka said. “It is a huge task but not a mission impossible. This is the mission of our time.” 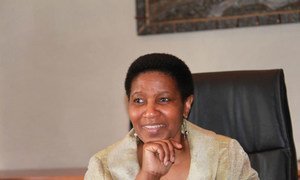 The United Nations entity tasked with promoting gender equality today launched a major campaign kicking off a year-long, worldwide commemoration of the 20th anniversary of the landmark Fourth World Conference on Women in Beijing.