UNHCR/B. Diab
A UNHCR container truck heads for Sweida with aid to be distributed to needy Syrians displaced within the south of their country.
26 June 2014

Four months after the Security Council adopted a resolution demanding unimpeded access to people in need of assistance in Syria, relief agencies continue to face obstacles to aid delivery while the needs continue to grow and are now outpacing response efforts, the United Nations humanitarian chief reported today.

Four months after the Security Council adopted a resolution demanding unimpeded access to people in need of assistance in Syria, relief agencies continue to face obstacles to aid delivery while the needs continue to grow and are now outpacing response efforts, the United Nations humanitarian chief reported today.

Resolution 2139, adopted by the Council in February, demanded action by parties to the conflict in a number of areas including ceasing attacks against civilians and doing everything in their power to facilitate rapid, safe and unhindered humanitarian access to people in need of assistance.

Under-Secretary-General for Humanitarian Affairs Valerie Amos told the Council that since the adoption of the resolution, an additional 1.2 million people in Syria need humanitarian assistance, bringing the total to 10.8 million. The number of people in need in hard-to-reach areas now stands at 4.7 million.

“Thousands of people continue to lose their lives every month. In the continued absence of a political solution to the crisis, humanitarian workers will continue to do everything they can, but we recognize that we cannot do it alone,” she said in her briefing.

“We look to the Council to help us ensure that the parties to the conflict abide by their obligations under international law,” she added, noting that 10.8 million women, men and children depend on that support.

Ms. Amos said that while UN agencies and non-governmental organization partners continue their efforts to meet urgent humanitarian needs, insecurity and active conflict play a role in preventing humanitarian access to many locations.

“However, arbitrary restrictions and obstructions, including bureaucratic procedures imposed by the Government, limit or obstruct where we deliver aid, to whom and how often. Some opposition groups have also attacked, threatened and refused to cooperate with humanitarian workers.”

For example, the Government of Syria introduced new truck sealing procedures in April intended to streamline and ensure safe passage of regular aid deliveries. This new mechanism was poorly implemented and resulted in a large backlog of deliveries.

Food assistance fell by nearly a million in May and has yet to be restored to previous levels, with only 50 per cent of planned food assistance dispatched in June, Ms. Amos noted. On 9 June, the Government announced additional requirements involving the submission of monthly distribution plans and weekly loading plans.

In addition, the Government introduced new procedures for the delivery of assistance to hard-to-reach locations through UN hubs. The new procedures require three levels of approval, undermine previous agreements and have caused two successive months of decline in aid deliveries.

“I cannot describe to the Council the frustration felt by experienced aid workers who have to spend endless hours trying to get agreement for aid deliveries as people’s lives hang in the balance,” said the Under-Secretary-General.

“The focus of the Government of Syria remains on controlling the work of the UN and its partners. Our focus remains on the people who so desperately need our help.”

She also reported that violence and attacks on civilians by all parties to the conflict and human rights abuses continue unabated, with devastating consequences for those affected. “There have been numerous examples of targeted or indiscriminate attacks on civilians in densely populated areas, in violation of the most fundamental principles of international humanitarian law.”

One example was the morning of 18 June when barrel bombs were dropped on a camp for displaced people in As Shajara in southern Syria, near the border with Jordan. Around 350 families lived in the camp. Dozens of people, including women and children were killed.

Countless others have lost their lives or been injured as the conflict – now in its fourth year – continues to rage in other parts of country, including in the Governorates of Aleppo, Hama, Idleb, Dar’a, Rural Damascus and Deir-ez-Zor, said Ms. Amos, who is also UN Emergency Relief Coordinator.

She said 241,000 people continue to live under siege conditions unable to leave their communities. Since her last briefing to the Council, only 2,467 people – or 1 per cent of those living in besieged areas – have received much needed food assistance.

“Once again, I remind this Council that targeting or indiscriminately attacking vulnerable civilians constitutes a war crime,” said Ms. Amos.

“There can be no justification for such action. Deliberately obstructing humanitarian access and depriving civilians of access to services essential to their survival, is unlawful and inhumane.”

♦ Receive daily updates directly in your inbox - Subscribe here to a topic.
♦ Download the UN News app for your iOS or Android devices.
syria|humanitarian 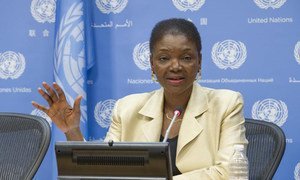 The demand by the Security Council for aid access to war-torn Syria has not produced the intended result, the United Nations humanitarian chief said today, while warning that the needs of those affected are rising steadily as the conflict rages on.