The United Nations will help Equatorial Guinea to reduce poverty and inequality, and promote food security, Secretary-General Ban Ki-moon pledged today as he arrived in the country on the eve of his address to the African Union Summit.

The United Nations will help Equatorial Guinea to reduce poverty and inequality, and promote food security, Secretary-General Ban Ki-moon pledged today as he arrived in the country on the eve of his address to the African Union Summit.

“The United Nations stands ready to do more for the people of Equatorial Guinea,” Mr. Ban said as he inaugurated UN House, a state-of-the-art building in the capital, Malabo, which will bring the various UN bodies working in the country under one roof.

“We will assist in ensuring universal education, achieving gender equality and empowering women. We will help advance respect for human rights. And we will work to improve health conditions, including helping more women to survive childbirth, reducing malaria and tuberculosis, and preventing and combating the spread of HIV/AIDS,” he stated.

“The United Nations,” he added, “is resolved to stand with the people of Equatorial Guinea as they advance to a better future.”

Equatorial Guinea is hosting the annual high-level gathering of the member countries of the African Union, which this year is devoted to agriculture and food security.

Mr. Ban commended the AU on its resolve to end hunger and malnutrition by 2025, and noted that it has declared 2014 the Year of African Agriculture and Food Security.

In addition, he commended the Government of Equatorial Guinea for its donation of $30 million to the Africa Solidarity Trust Fund, which was launched last year and is managed by the UN Food and Agriculture Organization (FAO).

At a ceremony in Malabo today, the Trust Fund gave the green light to four new projects, worth $16 million, that will span 24 countries and focus on youth employment and malnutrition, transboundary animal diseases and food safety and urban food security.

“The agreements that have just been signed today are integral to Africa's goals for revolution in agricultural productivity,” said Mr. Ban, who was present at the ceremony along with the President of Equatorial Guinea, Obiang Nguema Mbasogo, and FAO Director-General José Graziano da Silva.

“In Africa we see the growing commitment of countries not only to improving their own food security, but that of their neighbours as well,” said Mr. Graziano da Silva.

“The Africa Solidarity Trust Fund is a concrete manifestation of Africa's willingness to work together to guarantee the food security of the entire continent,” he added.

♦ Receive daily updates directly in your inbox - Subscribe here to a topic.
♦ Download the UN News app for your iOS or Android devices.
equatorial guinea 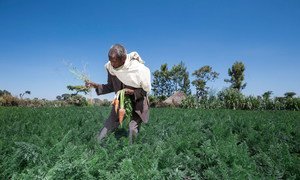 A unique, Africa-led United Nations-backed fund designed to improve food security across the continent has become a reality for the first six countries slated to benefit from the initiative.