24 June 2014
With women and girls in Central African Republic (CAR) falling prey to a raft of “terrifying” violations ¬perpetrated by armed groups – from rape to sexual slavery and forced marriage ¬– the head of UN Women today urged the Security Council to take strong action to help restore the rule of law in the country and bolster women’s participation, leadership and protection.

Briefing on her recent mission to CAR, Phumzile Mlambo-Ngcuka, Executive Director of UN Women, told the Council that she and Bineta Diop, Special Envoy of the African Union on Women, Peace and Security, had aimed to spotlight the plight of women and girls, ensure that gender issues are addressed from the outset in the newly established UN mission, and to promote women’s participation and leadership in local reconciliation, transitional justice, and upcoming elections.

“What we saw and heard was terrifying,” said Ms. Mlambo-Ngcuka, explaining that in displacement camps countrywide, including one visited by the two officials, people sought shelter under plastic covers or even pieces of cloth in inhumane conditions, surrounded by puddles of dirty, stagnant water and garbage, vulnerable to waterborne diseases.

As for reports of rape, sexual slavery, and other violations perpetrated by armed actors, she said that such reports had been confirmed last December by a UN fact-finding mission led by the Office of the High Commissioner for Human Rights (OHCHR) and supported by UN Women.

“This violence has taken place in house-to-house searches, unauthorized road blocks, military camps, and as part of sectarian violence,” she continued, adding: “We learnt that girls are frequently subjected to forced marriage. Many have become pregnant, miscarried, or contracted sexually transmitted diseases, including HIV.”

With women and girls facing such miserable conditions, she told the Council there is a great need for medical and psycho-social support in sites for internally displaced persons (IDPs), 90 per cent of which lack services for survivors of gender-based violence. “The very few services that are available assist hundreds of victims of rape every month,” Ms. Mlambo-Ngcuka added.

“What I heard over and over again from women was that security and rule of law, healthcare, food, and schools were the country’s greatest needs,” she continued, noting that nearly two-thirds of schools in the CAR remain closed, and hundreds of thousands of children are growing up without an education.

In addition, neighbouring countries are struggling to provide adequate support to tens of thousands of refugees. Cameroon now hosts approximately 100,000 newly arrived refugees, of whom 84 per cent are women and children who arrive after traveling for many days or weeks, and are often sick and traumatized.

“These alarming and distressing facts are important to highlight because – as of today – less than one-third of the [UN] humanitarian appeal has been funded by the international community,” she said, calling for the urgent and full funding of that appeal.

“I also call your attention to a very different side of the Central African Republic,” said Ms. Mlambo-Ngcuka, explaining that against the odds, many people – including women from all walks of life – are organizing to survive and prosper. Indeed, women leaders across religious and social divides are clear in their resolve to bridge their difference and build a better future.

“I urge members of the Security Council to support the women of the Central African Republic, and to implement the gender equality recommendations issued by the UN electoral needs assessment mission,” she said, stressing that the success of reconciliation initiatives, upcoming elections, and national recovery depends upon women’s leadership and participation.

As for the UN integrated mission in CAR, known as MINUSCA, she said that when that operation is up and running, priority should be given to special temporary measures and quotas for women’s representation, and MINUSCA protection and security for women’s participation in the elections.

Ms. Mlambo-Ngcuka reiterated further priorities, including that the Council ensure that troop-contributing countries for MINUSCA provide all troops access to the training on prevention of sexual violence; that women are represented in all processes that deal with peacemaking, peacebuilding and reconciliation; that efforts to rebuild the justice system and secure accountability for grave crimes include dedicated sexual and gender crimes experts; and education and economic well-being is also addressed.

In his remarks, the Secretary-General’s Special Representative for CAR, Babacar Gaye, said that the security situation “remains tense” in the capital, Bangui, and inside the country. The recent attack on the Notre-Dame de Fatima de Bangui church on 28 May, where 11 people including the priest were killed, illustrates not only the dangerous spiral of attacks and reprisals shaking the country, “but also radicalization of both parties and the risk of a worse situation.”

“There is no doubt. To achieve lasting security, disarmament and an inclusive political dialogue are essential steps,” he said, noting the recent seminar facilitated by the Centre of Humanitarian Dialogue at the request of the Head of State of the Transition as well as a dialogue initiative of a local non-governmental organization as encouraging developments.

“They indicate that many Central Africans are ready for dialogue if they believe it will bring peace,” said Mr. Gaye. 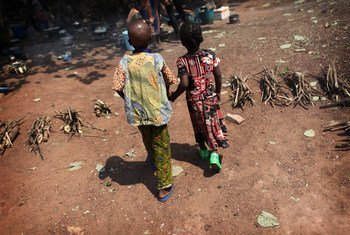 13 June 2014
As ongoing violence in the Central African Republic (CAR) continues to drive civilians to seek safety elsewhere, the United Nations refugee agency is appealing to neighbouring countries to keep their borders open and allow access to safe haven for people on the run.