Global environmental crime, possibly worth more than $200 billion annually, is helping finance criminal, militia and terrorist groups and threatening the security and sustainable development of many nations, notably in sub-Saharan Africa, according to a new joint United Nations-INTERPOL report.

The report was compiled by the UN Environment Programme (UNEP) and INTERPOL for release at the first UN Environment Assembly (UNEA) in Nairobi this week, where action to tackle environmental crime is high on the agenda for hundreds of environment ministers, law enforcement officers, the judiciary and senior UN officials.

“Sustainable development, livelihoods, good governance and the rule of law are all being threatened, as significant sums of money are flowing to militias and terrorist groups,” he added.

The UN Environment Assembly is the highest-level UN body ever convened on the environment. It enjoys universal membership of all 193 UN Member States, as well as other stakeholder groups.

The report Environmental Crime Crisis , points to an increased awareness of, and response to, the growing global threat, but calls for further concerted action and issues recommendations aimed at strengthening action against the organized criminal networks profiting from the trade.

According to the new report, one terrorist group operating in East Africa is estimated to make between $38 and $56 million per year from the illegal trade in charcoal.

Wildlife and forest crime also play a serious role in threat finance to organized crime and non-State armed groups, including terrorist organizations. Ivory, for example, provides income to militia groups in the Democratic Republic of Congo (DRC) and the Central African Republic.

Combined estimates from the Organisation for Economic Co-operation and Development (OECD), the UN Office on Drugs and Crime (UNODC), UNEP and INTERPOL place the monetary value of all environmental crime — which includes logging, poaching and trafficking of a wide range of animals, illegal fisheries, illegal mining and dumping of toxic waste—at between $70 and $213 billion each year.

Illegal logging and forest crime has an estimated worth of $30 to $100 billion annually, or 10 to 30 percent of the total global timber trade. An estimated 50 to 90 percent of the wood in some individual tropical countries is suspected to come from illegal sources or has been logged illegally.

With current trends in urbanization and the projected growth of over one billion additional people in Sub-Saharan Africa by 2050, the demand for charcoal is expected to at least triple in the coming three decades. This will generate severe impacts such as large-scale deforestation, pollution and subsequent health problems in slum areas.

The increased charcoal demand will considerably increase the purchasing power of non-State armed groups, including terrorist organizations, and accelerate emissions if left unchallenged.

The overall size of the illicit charcoal export from Somalia has been estimated at $360–$384 million per year, the armed group in East Africa earning up to $56 million of this.

For pulp and paper production, networks of shell companies and plantations are used to funnel illegal timber through plantations, or to ship wood and pulp via legal plantations. These methods effectively bypass many current customs efforts to restrict the import of illegal tropical wood to the United States and the European Union.

The report highlights poaching across many species, including tigers, elephants, rhinos, great apes and Saiga antelopes:

The report says while more needs to be done, the scale and nature of the illegal trade in wildlife has been recognized and some successes have been scored but the scale and coordination of efforts must be substantially increased and widened.

♦ Receive daily updates directly in your inbox - Subscribe here to a topic.
♦ Download the UN News app for your iOS or Android devices.
species

World’s fastest animal, in race for survival, to get added UN-backed protection 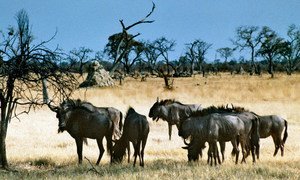