OPCW-UN Joint Mission
Special Coordinator of the Joint Mission of the OPCW and the UN Sigrid Kaag (second left) inspecting preparations for the elemination of chemical weapons at the Syrian Port of Latakia in December 2013.
23 June 2014

The Joint Mission of the Organization for the Prohibition of Chemical Weapons and the United Nations (OPCW-UN) announced today that the removal of Syria’s chemical weapons material is now complete.

The removal of the most critical material for destruction began in early January, in line with an agreement brokered by Russia and the United States, by which Syria renounced its chemical weapons material and joined 1992 Chemical Weapons Convention.

The focus in recent weeks had been on the removal of the remaining 7.2 per cent of the declared chemical weapons material which had been difficult owing to volatile security conditions.

“With this last movement, the total of declared chemical weapons materials destroyed or removed from Syria has reached 100 per cent,” the Joint Mission stated in a news release. “The most operationally challenging task within the effort to eliminate the Syrian chemical weapons programme has come to an end.”

UN Secretary-General Ban Ki-moon welcomed the announcement and congratulated the Joint Mission for completing “this most challenging of tasks” in an active war zone, according to a statement issued by his spokesperson.

In addition to completing the removal operation, the Joint Mission said that Syria has destroyed all declared production, mixing and filling equipment and munitions, as well as many buildings associated with its declared chemical weapons programme.

With the exception of 12 production facilities that are awaiting a decision by the OPCW Executive Council, all of the declared Syrian chemical weapons programme has been eliminated in an “unprecedented timeframe and under uniquely challenging conditions.”

The removal of the chemical agents out of Syria involved shipping them on commercial vessels provided by some Member States, and then loading them onto a United States ship and destroying them at sea using hydrolysis.

The Joint Mission recognized the “constructive cooperation and commitment” demonstrated by the Syrian Government throughout the operation. It also expressed gratitude to a number of countries who provided critical resources and facilitated the operation in different ways.

“A new chapter in the elimination process now begins,” said the Joint Mission, which thanked the Italian authorities for providing a port for transloading part of the cargo, after which the rest of the materials will be transported onward to the various destruction facilities.

Notwithstanding the progress made on the chemical weapons front, the Joint Mission said it remained mindful of the human tragedy that has befallen the people of Syria who have been suffering through a conflict that is currently in its fourth year.

“We hope that our contribution will ultimately make a meaningful difference for the Syrian people and the region.” 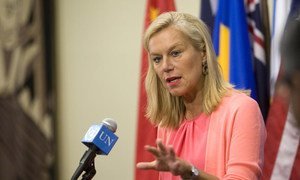 Given that the 30 June 2014 deadline for the destruction of Syria’s chemical weapons programme will not be met, the focus now is on the immediate removal of the remaining materials, the head of the Joint Mission of the Organization for the Prohibition of Chemical Weapons and the United Nations (OPCW-UN) said today.