The United Nations mission in Afghanistan strongly condemned Saturday's targeted attack on Masoom Stanekzai, a government minister and the Head of the Secretariat of the country's High Peace Council.

The United Nations mission in Afghanistan strongly condemned today's targeted attack on Masoom Stanekzai, a government minister and the Head of the Secretariat of the country's High Peace Council.

A suicide bomber reportedly detonated his explosives near Mr. Stankezai's passing motorcade in the capital, Kabul, according to the UN Assistance Mission in Afghanistan (UNAMA). The minister was not injured but the attack killed one civilian and injured several others.

“All attacks on civilians should be condemned, Ján Kubiš, the Secretary-General's Special Representative for Afghanistan and head of UNAMA, said in a statement.

“This attack is particularly worthy of condemnation as it targeted someone who has been working incessantly and tirelessly for peace and reconciliation in the country for many years, particularly through his work as head of the High Peace Council Secretariat,” he stated, adding that those responsible should be brought to justice quickly.

UNAMA reiterated that attacks directed against civilians are serious violations of international humanitarian law which parties to the armed conflict – including all anti-Government elements – must uphold.

Meanwhile, the Secretary-General's Deputy Special Representative for Afghanistan, Nicholas Haysom, said today that the UN stands ready to assist in resolving the “current political impasse” that has arisen in the wake of last week's presidential run-off elections.

He said that any role for the UN should be agreed with the relevant Afghan stakeholders involved. “We have very firmly stated that we will walk with Afghans down this difficult road in this political transition,” he told reporters in Kabul.

Last week, one of the two candidates in the run-off, Abdullah Abdullah, announced the suspension of his campaign's involvement in the Afghan-led and -managed elections process, called for a halt to that process and raised the possibility of a commission to settle poll-related disputes under UN supervision.

UNAMA noted that President Hamid Karzai has echoed Dr. Abdullah's suggestion of a possible UN role as one of two options to address the political impasse.

“Just to emphasize once again: going forward, we are going to be encouraging the candidates and the candidate teams to engage with each other, and with the election management bodies, hopefully, in the task of building trust and confidence in the process,” Mr. Haysom stated. 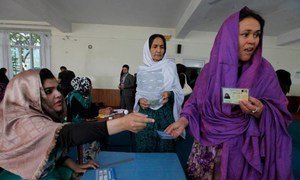