The political transition in Yemen is moving forward, a senior United Nations official told the Security Council today, but he warned that the presence of Al Qaeda in the Arabian Peninsula remains “a very real and lethal threat” requiring more concerted and sustained international assistance.

“As Yemenis are weaving together the tapestry of their new country, some threads are unfortunately unravelling that could adversely affect Yemen’s transition,” Special Adviser Jamal Benomar told journalists, recounting some of the points from his briefing to the 15-member Council.

During the closed-door discussion, he said, Council members expressed concern “that some spoilers continue to agitate and cause trouble” in an attempt to distract from implementing the National Dialogue Conference outcomes and the remaining steps of the political transition.

Yemen has been undergoing a democratic transition, with a Government of National Unity, which came to power in an election in February 2012 following the resignation of former President Ali Abdullah Saleh. He had agreed to step down following widespread protests similar to those seen across the Middle East and North Africa as part of the so-called “Arab Spring” pro-democracy movement.

The country last year held a National Dialogue Conference, which brought new actors to the political process such as youths, women, civil society representatives and the Hiraak Southern Movement. The Conference aimed to feed into a constitution-making process and pave the way for general elections later this year.

In the South, where pro-secession protests are more common, Al Qaeda in the Arabian Peninsula (AQAP) militants have recently been targeting military installations, displacing tens of thousands of people, according to estimates by the UN Office for the Coordination of Humanitarian Affairs (OCHA).

The Council also discussed the situation in the North, where Houthis and other armed groups have been fighting.

“I informed the Council about the need for a political track on the North that will sustain the current fragile ceasefires,” Mr. Benomar said, underscoring that the Dialogue outcomes called for disarmament and recovery of State-owned heavy and medium weapons.

Among other issues discussed, Mr. Benomar said he raised the issue of funding, and the inability of the Government to finance the budget in the coming year which could contribute to the country’s instability. For example, the Government is facing challenges paying for highly-subsidised fuel, which has in the past sparked protests.

“Only 35 per cent of the $7.9 billion pledged at the Riyadh donor conference in 2012 has been disbursed,” the UN envoy noted, referring to the “Friends of Yemen” donors’ conference held in Saudi Arabia. 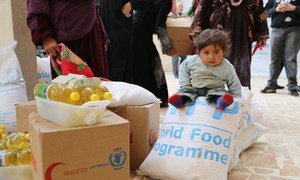