20 June 2014
The United Nations today voiced concern as the health of a number of Palestinian hunger strikers protesting Israel’s ongoing use of administrative detention is reportedly worsening, and more than 200 Palestinians have been detained in the West Bank since 12 June when three Israeli teenagers went missing.

“We continue to follow closely the situation of Palestinian hunger strikers protesting Israel's ongoing practice of administrative detention,” Ravina Shamdasani, spokesperson for the Office of the High Commissioner for Human Rights (OHCHR), told reporters in Geneva. “The health of a number of hunger strikers is reportedly critical and continues to deteriorate.”

She noted that both High Commissioner Navi Pillay and Secretary-General Ban Ki-moon have repeatedly stated that administrative detainees should be charged or released without delay.

OHCHR is also concerned that the legislative amendment on force-feeding before the Israeli Knesset could be passed as early as next Monday, and that a new provision reportedly allowing for the sedation of prisoners who refuse force-feeding has been introduced in the bill.

Ms. Shamdasani said the High Commissioner has written to the Israeli Permanent Representative in Geneva to express her concerns that, if passed, this amendment would permit force-feeding and medical treatment of prisoners on hunger strike against their will under certain conditions, in contravention of international standards.

The Office is closely following the human rights situation in the occupied Palestinian territory after three Israeli teenagers went missing on 12 June in the West Bank near the city of Hebron.

“We express our solidarity with the boys’ families and hope the teenagers will be located, as soon as possible, safe and sound to be reunited with their families,” Ms. Shamdasani stated.

“Also, this morning, a Palestinian teenager was reportedly shot and killed in the West Bank, adding to the tragedy of teenagers and children falling victim to the failure to resolve the situation,” she noted.

In addition, OHCHR is concerned by reports, that since 12 June, more than 200 Palestinians have been detained in the West Bank in the context of security operations by Israel.

Ms. Shamdasani reported that restrictions on the freedom of movement of Palestinians have been tightened, including the banning of men between the age of 20 and 50 from Hebron crossing into Jordan. The Israeli cabinet has also reportedly decided to impose harsher conditions on prisoners affiliated with Hamas.

“We urge all actors to ensure respect for international human rights and international humanitarian law, including by avoiding punishing individuals for offences they have not personally committed or by imposing collective penalties,” she stated. 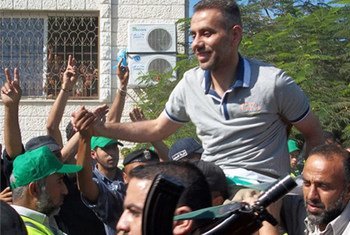 6 June 2014
Secretary-General Ban Ki-moon voiced concern today about reports regarding the deteriorating health of Palestinian administrative detainees who have been on hunger strike for over a month.