WFP/Alexandre Breche
Bags of food from WFP’s logistics base in Mopti, Mali, waiting at Koureme port, near Timbuktu, to be delivered to schools.

19 June 2014
A senior United Nations relief official today highlighted the need for “courageous leadership” by the authorities in Mali to tackle the country’s political issues, warning that the already grave humanitarian situation is likely to deteriorate unless peace and stability are restored.

The situation in Mali “is most certainly not hopeless, but at the moment it’s quite bleak,” John Ging, Director of Operations in the Office for the Coordination of Humanitarian Affairs (OCHA), said as he briefed reporters following a three-day visit to the country last week.

Despite initial improvements in 2013, the situation in northern Mali has deteriorated since the beginning of this year. Recent violence, mostly targeting Malian and international security forces, has contributed to an overall sense of insecurity that has impeded the return to normalcy and resumption of economic and development activities.

“The tragedy of this country is that it is caught up in this situation which is man-made, compounded by its physical location in the Sahel,” said Mr. Ging. “The good news is that it is a country that has the potential to sustain itself if it can address successfully the issues that are underpinning the violence.”

The “very grave” humanitarian situation in Mali includes almost 500,000 children under the age of five who are at risk of acute malnutrition; some 1.5 million people in need of immediate food assistance; and well over 640,000 children who have had their schooling interrupted.

Mr. Ging also noted that there are 137,000 Malian refugees in neighbouring countries and 151,000 displaced in Mali itself.

“Those figures have reduced from their peak of the crisis in June 2013, so we have seen some progress in terms of people returning to their homes but the latest round of violence of course undermines that confidence,” he pointed out.

A concern that was expressed to him throughout his visit was that of the vulnerability of women and the risks they are facing, including violence against them. “Violence against women is a big issue and it’s an appalling issue; an issue that we really have to mobilize much more effective action to address,” Mr. Ging stated.

He also noted that amid the ongoing insecurity, the international community is carrying out a large humanitarian operation, often in “difficult and dangerous” circumstances. The UN and its partners have reached over half a million with food assistance; over 200,000 have received permanent access to drinking water; 146,000 people are receiving health care; and 420,000 students are getting learning materials and support with education.

At the same time, Mr. Ging said that the people have voiced their hope that the authorities will do more to ensure peace and stability.

“There’s a really high degree of expectation among the population that the Government… will step up to their responsibility and exercise courageous leadership to address political issues that have been unaddressed for decades,” he stated.

“We in the humanitarian field, we don’t stray into the politics of these conflicts, except to say that we are not the solution to the problems the people are facing.

“We must give voice to the demands of the people, and the demand of the people is very clear: they are seeking an end to the current situation, a solution which will give a peaceful and secure environment and enable them to get on with their lives.” 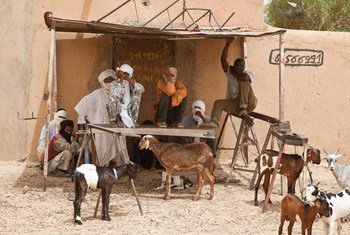 23 May 2014
Deadly clashes between Tuareg rebels and Government forces in northern Mali have sent a “small but growing” number of terrified civilians fleeing southward and into neighbouring countries, the United Nations refugee agency said today, while senior UN and African Union officials are in Kidal to push for a ceasefire.