Human security – broadly defined by the United Nations as “the right of people to live in freedom and dignity, free from poverty and despair” – provides a new way of thinking about the range of 21st century challenges and how to respond to them, UN officials said today, backing this people-centred approach as vital to the ensuring sustainable development for all.

“This debate – writ large – is about billions of peoples, in all corners of the world, who are caught in a vicious circle of poverty, marginalization and insecurity,” declared General Assembly John Ashe in remarks to the thematic debate on “Responding to the opportunities and challenges of the 21st century: Human security and the post-2015 development agenda.”

He said the threats faced by many around the world, sometimes on a daily basis, have called on UN Member States to look beyond State-centric notion of security and move towards people-centred responses to challenges as diverse as climate change, rapid urbanization and post-conflict reconstruction.

“By affirming that security includes “freedom from want,” the human security approach calls on us to examine the relationship between income distribution and economic, social and environmental dynamics,” he continued, and as such, it recognizes and seeks to address the multiple dimensions of poverty – including underemployment; poor health; lack of access to education; inequality, including gender inequality – in a more coherent and systemic manner.

Finally, with a focus on early prevention and risk mitigation, strategies rooted in human security can strengthen State-society relations and empower communities as active agents of change. “This approach can be particularly useful in the context of human-centred threats with a global character, such as climate change or large-scale pandemics,” said Mr. Ashe.

“Indeed, by underscoring the importance of inclusive, targeted and comprehensive solutions to widespread and cross-cutting challenges, human security can provide useful methodology for the analysis and development of policies and programmes in formulating the post-2015 sustainable development goals,” he said, referencing the work of the United Nations to craft a global agenda to succeed the landmark, largely anti-poverty Millennium Development Goals (MDGs).

In his remarks, Deputy Secretary-General Jan Eliasson recalled that earlier this year, the Secretary-General had released his third report on human security, based on contributions from Member States, regional organizations, the UN system, non-governmental organizations and academic institutions. It catalogues a wealth of examples and lessons learned in removing obstacles to sustainable development and tackling poverty.

“Governments are starting to rise to the challenge,” continued Mr. Eliasson, citing reports from Kenya, Mexico, Mongolia and Lithuania that showed how adopting an approach focused on human security is allowing Governments and people to develop national and local solutions to seemingly intractable problems.

“It is clear that the principles enshrined in human security, including the right of people to live in freedom and dignity, can help us in our efforts to achieve peace and security,” he said, underscoring that such principles can have a positive impact on dealing with a raft of diverse challenge sand have also helped underpin much of the successful work the UN has been able to carry out around the world.

Noting that the term “human security” was introduced at the United Nations 20 years ago and that substantial contributions have been made by Member States since then, Mr. Eliasson said: “We now need to look ahead and consider how the underlying principles of human security also can be applied to our post-2015 development agenda.” 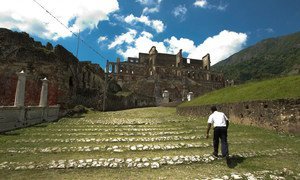 Culture, in all its multifaceted dynamism, must be thoroughly integrated in the post-2015 development agenda, senior United Nations officials told the General Assembly today, highlighting the need to recognize the vital role that culture plays in combatting poverty and promoting sustainable growth.