UNAMA
Women in Kabul voting for a president in Afghanistan's second and final round of elections.
18 June 2014

In a press statement, the UN Assistance Mission in Afghanistan (UNAMA) said it learned of the decision of Abdullah Abdullah to suspend his campaign’s cooperation with the Independent Election Commission (IEC) and the Independent Electoral Complaints Commission (IECC) at his press conference today, in addition to his suggestion that a commission under UN supervision be created to oversee the election process.

In the wake of Dr. Abdullah’s announcement, UNAMA chief Ján Kubiš said “regrettable as this step may be, we will continue to engage closely with both campaigns and the electoral commissions, consulting with them on a way forward.” He also recalled the code of conduct signed by both candidates where they pledged to cooperate with the electoral commissions.

“We believe that the electoral process should continue as laid out in the laws passed by the National Assembly. In particular, the mandate of the electoral institutions – [IEC] and the [IECC] – must be respected,” he added.

“For their part, the electoral bodies have to demonstrate the highest levels of transparency and integrity and continue to proactively respond to valid candidate concerns,” Mr. Kubiš continued. “All efforts should be made to ensure that all valid votes are counted and all invalid ballots rejected – such efforts will have our full support.”

With the utmost concern, the UN Mission noted that appeals to circumvent or abandon the legal process and framework and appeal directly to supporters could incite violence. Indeed, some people have already called for civil disobedience and some incidents have already taken place, UNAMA said in its statement.

As such, UNAMA strongly urged the candidates to take all steps necessary to control their supporters to prevent them from making any irresponsible statements and from taking steps that could lead to civil disorder and instability.

In addition, the Mission urged the candidates and their supporters to act in the national interest and reminded them of their personal and political responsibility for peace, stability and the unity of the country. 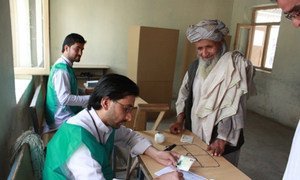 The United Nations today strongly condemned the continued, targeted killing of Afghan election workers in the wake of last Saturday’s presidential run-off poll, and stressed that they must be able to carry out their important work without the threat of violence.