The reduction of peacekeeping personnel in Côte d'Ivoire will continue, given ‘impressive’ progress there, but the rapid reaction capabilities of remaining forces must be boosted to help ensure security during planned elections, the top United Nations envoy in the West African country told the Security Council today.

“At the end of the month of May, we have achieved the withdrawal of 1,700, in line with Security Council Resolution 2112 (2013),” Aïchatou Mindaoudou, the head of the UN Operation in Côte d'Ivoire (UNOCI) said, presenting the Secretary-General’s latest report.

“These military reductions have been possible because of the important progress accomplished, and we offer our congratulations,” added Ms. Mindaoudou, who is also the Secretary-General's Special Representative to the country.

“At the same time,” she cautioned, “we are aware that the elections foreseen for 2015 will be an important step for the country and will take place in a sensitive environment.” For that reason, she said it was important to follow the report’s recommendation for prudence in further reductions.

In order to make up for the absence of a permanent military presence in many areas, and to assist with security in elections, it was equally important, she added, to strengthen the rapid reaction capabilities of UNOCI, including the ability to transport elements quickly by helicopter.

This past May, she said, UNOCI organized a series of military exercises meant to develop the capacity to react in less than six hours to all emergency situations anywhere in Côte d'Ivoire.

Côte d’Ivoire was shaken by post-election violence following its 2010 presidential polls when Laurent Gbagbo refused to step down after losing to Alassane Ouattara. Those elections were meant to be the culminating point in the peace process between the rebel-held north and Government-controlled south following the 2002 civil war, but instead they resulted in months of violence. Mr. Gbagbo finally surrendered the following April.

Since then, UN officials have encouraged all Ivorian political actors to work in support of an inclusive political dialogue and national reconciliation, as prerequisites to establishing lasting peace and economic development in the country.

In today’s Council presentation, Ms. Mindaoudou cited “impressive” rates of economic growth and “a new momentum” in reconciliation, although challenges that remain ahead of the planned elections include difficulties in the dialogue between the Government and the political opposition, and continued criminality and other security threats, particularly in the west of the country. 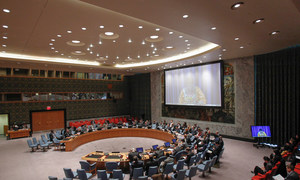 Côte d'Ivoire is making “good progress” towards lasting peace and stability, but with presidential elections on the horizon, urgent steps need to be taken in security sector reform and national reconciliation, the top United Nations official in the country told the Security Council today.