UNHCR/R. Nuri
Vehicles of Iraqis fleeing fighting in Mosul at the Khazair checkpoint between Ninewa governorate and the Kurdistan region.
4 June 2014

The United Nations human rights chief today condemned the reported “cold-blooded” mass execution in Iraq in recent days, while Secretary-General Ban Ki-moon urged that the perpetrators of those crimes be brought to justice while also calling on Iraqi leaders to prevent sectarian reprisals.

Navi Pillay, the High Commissioner for Human Rights, said that UN staff and other sources on the ground reported the executions of hundreds of Iraqis following last week’s capture of Mosul and other population centres by forces allied with the Islamic State of Iraq and the Levant (ISIL), including disarmed soldiers as well as religious leaders and other civilians.

“Based on corroborated reports from a number of sources, it appears that hundreds of non-combatant men were summarily executed over the past five days, including surrendered or captured soldiers, military conscripts, police and others associated with the Government,” said Ms. Pillay.

“Although the numbers cannot be verified yet, this apparently systematic series of cold-blooded executions, mostly conducted in various locations in the Tikrit area, almost certainly amounts to war crimes,” she stressed.

She said that those reportedly executed by ISIL include the Imam of the Grand Mosque in Mosul on 12 June and 12 other local imams on 14 June.

In a statement released last night, Mr. Ban’s spokesperson said the reports of mass summary executions “are deeply disturbing and underscore the urgency of bringing the perpetrators of such crimes to justice.”

He added: “The Secretary-General warns against sectarian rhetoric that could further exacerbate the conflict and carry grave implications for the entire region. In this regard, he welcomes the important clarification statement on the need for Iraqi unity of His Eminence Sayed Ali Al-Sistani, who represents a deeply influential voice of wisdom and reason.”

“The Secretary-General calls on all Iraqi leaders – political, military, religious and community – to ensure that their followers avoid acts of reprisal,” the spokesperson said, urging them instead “to coalesce behind an inclusive national security plan as well as political and social measures aimed at addressing, on the basis of the Constitution, the substantial threat to the country.”

Mr. Ban also urged solidarity from the international community in confronting the Iraq crisis and pledged the readiness of the UN Assistance Mission for Iraq (UNAMI) to assist the Government and people toward that end.

On the humanitarian front, UNAMI reported today that up to half a million people have been displaced by the fighting in Mosul, including 300,000 of whom have fled to Erbil and Dohuk in the Kurdistan region of Iraq.

UNAMI said that UN agencies and their partners are providing assistance to the displaced, including food, shelter and water to displaced families in Erbil. Additional tent sites are being set up in Dohuk to accommodate the increasing number of displaced people.

In addition, some 3,000 displaced families from Diyala reportedly arrived in Kurdistan’s Sulaimaniyah Governorate over the week and were being assisted, according to the UN Office for the Coordination of Humanitarian Affairs (OCHA).

Inside Mosul, an estimated 25,000 displaced people have sought refuge in schools and mosques OCHA says, adding that many have no access to drinking water because the main water station has been destroyed by bombing.

The World Food Programme (WFP), meanwhile, is warning of food scarcity in shops and markets in areas between Mosul and Kurdistan. The agency reported that it continues to scale-up its emergency response to reach more of the Iraqi displaced.

Also today, the World Health Organization (WHO), expressed concern over the spread of measles and polio, since measles is endemic in Mosul and there have already been reports of new polio cases in Iraq this year as a result of the Syria crisis.

In response, the UN health agency says, it has reinforced its early-warning system in Mosul and Kurdistan and is launching emergency polio and measles vaccination for displaced people in Erbil and Dohuk. 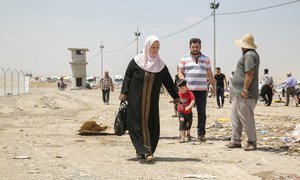 As insurgents continue to overrun parts of northern Iraq, the United Nations human rights chief expressed “extreme alarm” today at reports of summary executions and extrajudicial killings, and the massive displacement of some half a million people, many of whom are now in urgent need of shelter.