As the Group of 77 Summit ends today with a focus on creating a new sustainable development framework, United Nations Secretary-General Ban Ki-moon stressed to the G77 and China the importance of cooperation and partnerships to reduce inequality, end poverty and fight climate change.

“As the largest group of countries in the United Nations, you play a key role in ensuring a successful outcome to the efforts of the United Nations to formulate and effectively implement the post-2015 development agenda,” Mr. Ban told participants in Santa Cruz, Bolivia.

“The fate of billions of poor people and the state of the planet depend on the success of our efforts,” he underscored.

The two-day summit is expected to wrap up today with a document for the UN General Assembly to further discussions on a new sustainable development agenda that would begin after 2015, the deadline for the eight anti-poverty targets known as the Millennium Development Goals (MDGs).

“We will continue to accelerate our efforts but we have to be very practical,” Mr. Ban said, noting that there are around 440 days to accelerate efforts to reach the MDGs. Some targets might not be met, he concluded, and will have to included in the next set of development targets which will be officially agreed upon next year. The timing coincides with the 70th anniversary of the founding of the UN.

“We must harness the power of partnerships across the full range of development activities,” Mr. Ban said. “We must also put in place a robust accountability framework – backed by reliable and comparable data – to support our universal sustainable agenda.”

The new development goals must also balance the needs of people and the planet, the UN chief stressed, urging the gathered heads of state and government representatives from more than 130 countries to act against climate change and the unsustainable use of natural resources.

“All countries need to act on these priorities – individually and collectively. That is how I understand the theme of this Summit – a New World Order for Living Well,” he noted.

Mr. Ban will convene a climate summit in September this year when world leaders gather at UN Headquarters for the annual General Assembly meeting. His goal is to build on momentum ahead of official talks next year when world leaders will agree on a legally-binding treaty that would cut climate-altering greenhouse gas emissions.

The UN chief urged the G77 and China to “bring your ambitious goals and trials, your national action plans, and stay, so that other countries will follow your examples”.

“You have a legitimate right to raise your voice,” he stressed. “Unless you are united, with one single voice, it will be extremely difficult for the developing world to get strong support, particularly on climate financing.”

“I really count on your strong support,” he added.

In December, the UN Framework Convention on Climate Change (UNFCCC) will meet in Peru in its last official high-level meeting before the negotiations in Paris the next year.

In a meeting today on the sidelines of the summit, Mr. Ban discussed preparations for the UNFCCC meeting with Peruvian President Ollanta Humala. According to a UN spokesperson, Mr. Ban asked Mr. Humala “to exercise his leadership to garner commitment for the drafting of a strong agreement”, to which the president re-affirmed his personal commitment.

Also participating in the Summit is the current President of the UN General Assembly, John Ashe, who yesterday highlighted the importance of stable and peaceful societies to sustaining development.

“Conflicts, wherever they exist, are an impediment to development,” said Mr. Ashe, who represented his home country of Antigua and Barbuda when he chaired the G77 in 2008.

He noted that the resolution of conflicts through dialogue and mutual understanding among previously affected countries will allow Governments to redirect their efforts and resources towards development and poverty eradication. “Cooperation, particularly at the regional level, will be crucial, especially in the socio-economic areas.”

Among other key priorities, Mr. Ban, who also noted the importance of harmony in development, underscored the necessity for adhering to human rights, good governance and the rule of law in achieving sustainable development.

“This is why it is essential that members of the G77 and China support each other – including through effective regional institutions – to always uphold the United Nations Charter and the Universal Declaration of Human Rights.

To achieve the sustainable development goals, Mr. Ban said traditional economic powers will need to play their role towards development equality, through fairer global trade, technology transfers and incorporation of developing countries in the world's economic machinery, “but innovative forms of cooperation will need to play a major and growing role”.

This will include people-centric, public-private collaborations, as well as greater South-South and triangular cooperation, he noted.

The G77, which marks its 50th anniversary this year, was established in 1964 by 77 States to promote its countries' economic interests. The group now includes more than 130 countries, some two-thirds of the UN membership, and over 60 per cent of the world's population.

Later today, Mr. Ban met with President Nicolas Maduro of Venezuela, to whom he made a special plea to enhance its assistance to Haiti, particularly with regard to addressing the cholera epidemic.

According to a UN spokesperson, Mr. Ban also welcomed Mr. Maduro's efforts to engage with his opposition and expressed hope that all efforts would be made to resume the dialogue supported by the Union of South American Nations (UNASUR) and the Holy See.

Also today, the UN chief commended Cuba for hosting the peace talks between the Government of Colombia and the Revolutionary Armed Forces of Colombia (FARC). In a meeting with President Raul Castro, Mr. Ban said he hoped that, after decades, the conflict could end.

The situation in Haiti was also discussed, a spokesperson said, as was climate change, among other subjects. 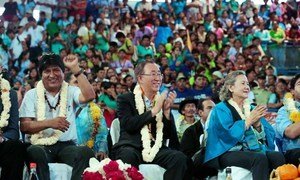 In Bolivia, Ban to urge G77 to work together on anti-poverty, climate change

Addressing the bloc of developing countries known as the Group of 77 (G77) and China, Secretary-General Ban Ki-moon is today expected to urge world leaders to work together to reduce poverty and inequality, while balancing the needs of the environment and addressing climate change.