UNAMA
Women in Kabul voting for a president in Afghanistan's second and final round of elections.
14 June 2014

Today's second round of the presidential election in Afghanistan is a major achievement in the country's historic democratic transition, top United Nations officials said, congratulating the voters and highlighting the efforts of the national security forces.

“The participation of men and women across the country demonstrates, once again, the commitment of the Afghan people to shape the future of their country and to reject violence and intimidation,” Secretary-General Ban Ki-moon said in a statement from his spokesperson.

The presidential election marks the first-ever transfer of power from one elected leader to another in Afghan history.

Voters were choosing between Abdullah Abdullah and Ashraf Ghani Ahmadzai to succeed President Hamid Karzai. Neither of the candidates achieved the necessary 50 per cent plus one result on 5 April.

“With the same determination, resilience and courage the world saw in the first round of elections, the people of Afghanistan today once again decided to take their destiny in their own hands and demonstrate their desire for a peaceful, prosperous, and united Afghanistan,” said Mr. Ban's Special Representative for Afghanistan, Ján Kubiš. “For this, they should be congratulated.”

Mr. Kubiš, who is also the head of the UN Assistance Mission in the country (UNAMA), also praised the “competence and dedication” of the Afghan National Security Forces, who enabled voting to take place without major disruptions.

With the votes now to be counted, Mr. Kubiš urged the candidates to make national unity and inclusivity their top priorities to serve the interests of the Afghan people.

Visiting a polling centre in the capital, Kabul, Deputy Special Representative Nicholas Haysom said the election is not perfect, nor is it ever in any country, and while the UN expects there to be some complaints “we have faith and hope that the election management bodies will be able to deal with those complaints in a way which satisfies the Afghan people”.

The UN Mission had said that the IEC and the IECC improved the electoral process in response to requests and recommendations from candidates and observers.

They are now expected to “tally the votes in a transparent and accountable manner, resolve complaints consistently and efficiently, and to transparently release the results,” Mr. Kubiš said.

“This vital work should be done with the utmost integrity and impartiality to protect the vote and to deal with complaints in a way that will satisfy the Afghan people,” he said, urging both candidates and supporters to respect the mandate and independence of the IEC and the IECC.

“Allow due process to take its course and respect the work of the Commissions, and accept the final results,” he urged.

Mr. Haysom echoed Mr. Kubiš, saying both candidates need to leave the resolution of disputes and complaints between them to the election management bodies.

“There is a great responsibility on both candidates to behave as statesmen and not behave like sportsmen – it's not a World Cup, it's a contest for the leadership of the country,” the deputy added.

He stressed also the election was “Afghan-administered, owned and managed”.

“In comparison to other elections anywhere we can say it has provided a significant opportunity for Afghans themselves to ensure that elections are free and fair.” 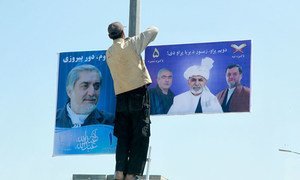 As the Afghan people head toward a historic run-off presidential election that will culminate the country’s first-ever democratic transfer of power, the top United Nations official there is encouraging them to actively participate in the polls, deliver the necessary change and help build a better future for their long-troubled nation.