The level of elephant poaching across Africa remains alarmingly high, according to a new United Nations-backed report release today, which also found an increase in the number of large seizures of ivory.

“Africa’s elephants continue to face an immediate threat to their survival from high-levels of poaching for their ivory and with over 20,000 elephants illegally killed last year, the situation remains dire,” said John E. Scanlon, Secretary-General of the Convention on International Trade in Endangered Species of Wild Fauna and Flora (CITES).

The report by the Convention’s Secretariat says that although the sharp upward trend in illegal elephant killing observed since the mid-2000s is levelling off, poaching levels continue to far exceed the natural elephant population growth rates, resulting in a further decline in elephant populations across Africa.

Three key factors cited for the higher poaching levels are poverty, weak governance and the demand for illegal ivory in consuming nations, according to a news release issued by CITES.

The report identifies monitored sites where poaching is increasing (33 per cent of monitored sites), including Dzanga Sangha (Central African Republic), as well as those sites where a decline in poaching has been observed (46 per cent), such as Zakouma National Park (Chad). Some populations of elephants continue to face an immediate threat of local extinction.

The report also shows a clear increase in the number of large seizures of ivory (shipments over 500 kilogrammes) made in 2013, before the ivory left the African continent.

For the first time, the number of such seizures made in Africa exceeded those made in Asia, according to CITES. Just three African countries – Kenya, Tanzania and Uganda – accounted for 80 per cent of those seizures.

The report, which contains the latest figures from the CITES Monitoring Illegal Killing in Elephants (MIKE) programme and the Elephant Trade Information System (ETIS), will be discussed at the 65th meeting of the CITES Standing Committee next month in Geneva. 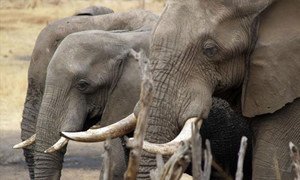