The agreement agreement, adopted on Wednesday by the annual conference of the UN International Labour Organization (ILO), is an additional protocol to ILO Convention 29 on forced labour from 1930.

According to the experts, it addresses existing gaps and strengthens the body of instruments on forced labour, including child labour, trafficking in persons, slavery and slavery-like practices and related human rights violations.

“An international legally binding protocol is essential to fight forced labour and hold perpetrators accountable, so its immediate implementation will be crucial,” the human rights experts said in a news release, noting that the agreement will enter into force after its second ratification by a UN Member State.

The expert’s praised the protocol’s inclusion of measures to advance prevention, protection and remedies against forced labour, as well as to enforce national laws and strengthen international cooperation from gender and child-sensitive approaches.

“Now we call on States to ratify the Protocol and ensure its full implementation,” they added

There are currently an estimated 21 million forced labour victims worldwide. A recent ILO report estimates that $150 billion in illegal profits are made in the private economy each year through modern forms of slavery.

According to ILO, more than half of the victims of forced labour are women and girls, primarily in domestic work and commercial sexual exploitation, while men and boys were primarily in forced economic exploitation in agriculture, construction, and mining. 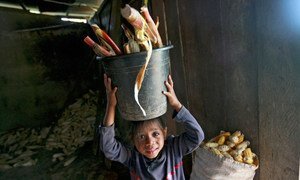 United Nations officials today marked the World Day Against Child Labour by highlighting the crucial role of social protection in keeping boys and girls out of a heinous practice that robs them of their childhood and threatens their prospects for a better future.