IOM Iraq
Since the onset of the Anbar crisis, IOM and WFP have strategically collaborated to distribute life-saving food items to IDPs fleeing violence throughout the central region of Iraq.
10 June 2014

Urging all political leaders in Iraq to show national unity against the myriad threats facing the country, Secretary-General Ban Ki-moon today expressed grave concern about the “serious deterioration” of security in Mosul, and condemned the recent spate of terrorist attacks that have left scores of dead and wounded in Iraq’s northern and eastern provinces.

In a statement issued by his spokesperson in New York, the UN chief said he is gravely concerned by the deteriorating situation in Mosul, where, according to news reports, after days of fighting against Government forces, militants associated with the Islamic State of Iraq (ISIS) and the Levant (ISIL) have overrun the city – the second largest in Iraq – forcing thousands of civilians to flee the violence.

Further to the statement, the Secretary-General “strongly condemned” the terrorist attacks in restive Anbar, Baghdad, Diyala, Ninewa, and Salah al-Din provinces that have killed and wounded scores of civilians over the past several days. Mr. Ban extended his profound condolences to the families of the victims and to the Government of Iraq.

“The Secretary-General urges all political leaders to show national unity against the threats facing Iraq, which can only be addressed on the basis of the Constitution and within the democratic political process,” said the statement.

Mr. Ban also encouraged the Government of Iraq and the Kurdish Regional Government to cooperate in restoring security to Ninewa Province and in delivering urgently needed humanitarian aid.

As for the situation in Anbar, about which the Secretary-General remains “deeply concerned”, the statement welcomes the convening of an Anbar reconciliation conference and strongly encourages all local tribal, political and religious leaders to participate constructively in order to put an end to the fighting.

In the statement, Mr. Ban recalls that all UN Member States have an obligation to implement and enforce the targeted financial sanctions, arms embargo and travel ban imposed on the Islamic State of Iraq and the Levant (ISIL) under the sanctions regime pursuant to Security Council resolutions 1267 (1999) and 1989 (2011).

“The United Nations, including UNAMI, will continue to support the Government and people of Iraq in building a peaceful, democratic and prosperous country,” the statement concludes. 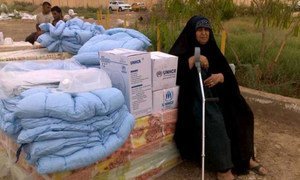 The United Nations Security Council has stressed its support for the engagement of all political groups in Iraq, where nearly 800 people fell victim to violence last month, on concerted efforts to ensure security for its entire population, particularly in Anbar province, which has been embattled for months.