FAO/Munir Uz Zuman
Small-scale fisheries are the source of employment for more than 90 percent of the world's capture fishers and fish workers.
9 June 2014

Marking the upcoming 20th anniversary of the entry into force of the landmark treaty that has become known as the “Constitution for the Oceans”, Secretary-General Ban Ki-moon today encouraged Member States to recommit to the United Nations Convention on the Law of the Sea (UNCLOS) at what he considers a crucial moment for climate change.

“People everywhere continue to look to the oceans for food security and as a source of jobs, prosperity and well-being,” Mr. Ban said in his remarks to the meeting of State parties to the UNCLOS, which runs through Friday at the Headquarters in New York.

“Oceans and seas can play a critical role in the achievement of the Millennium Development Goals and in the post-2015 development agenda,” he continued, referencing the anti-poverty targets whose approaching 2015 deadline has led to discussions on a new set of sustainable development goals.

Among its provisions, UNCLOS established that the seabed and the ocean floor beyond the limits of national jurisdiction are the “common heritage of mankind” whose use and protection are the right and responsibility of all.

The Convention, which came into force on 16 November 1994, governs all aspects of ocean space – including the delimitation of maritime boundaries, exploitation of living and non-living resources, protection and preservation of the marine environment, marine scientific research and the settlement of relevant international disputes.

The maritime accord also provides the basis for the equitable utilization, protection and preservation or resources in the oceans and seas.

The livelihoods of 12 per cent of the world’s population depend on the fishing sector. On average, 17 per cent of global animal protein intake comes from fisheries and aquaculture, and demand for fish protein is expected to double in the next 20 years, the UN Food and Agricultural Organization (FAO) has reported, yet some 28 per cent of global stocks are already overfished.

“We must address the many pressures facing the oceans as a result of overfishing, acidification, land-based activities and, above all, climate change,” he said, echoing his message for World Oceans Day, marked on 8 June and which this year underscored the power of collaboration to keep oceans and seas clean and healthy.

Mr. Ban will host a summit in September to further highlight the importance of climate change and sustainable development, and general momentum towards a universal UN-backed treaty on climate change by 2015 which would enter into force by 2020. 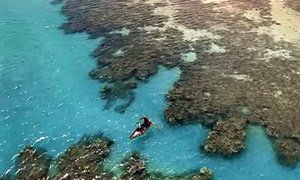