A new global new development agenda based on human rights and the rule of law is the surest pathway to balancing the needs of people and the planet, while eradicating extreme poverty and closing socio-economic gaps, senior United Nations officials said today.

Speaking to the UN General Assembly’s high-level event on that topic, Secretary-General Ban Ki-moon reminded participants that “everyone is entitled to all rights.”

“We have an opportunity to recognize the important role of human rights and the rule of law in reducing the vulnerability of the poor and building the future we want,” he told diplomats that are working towards a sustainable development agenda after 2015, the deadline for the UN Millennium Development Goals (MDGs).

Legal identity, starting from birth registration, is essential for equal access to basic services, the UN chief noted. He also highlighted the importance of secure land tenure, for example, for enhancing food security.

Mr. Ban stressed, however, that the realization of human rights, including the right to development, depends fundamentally on the rule of law consistent with international norms and standards.

He reminded participants of the “unfinished business” which includes children who remain unfed, uneducated, unprotected, unemployed and whose rights “remain unfulfilled.”

In a video address, the UN High Commissioner for Human Rights Navi Pillay urged participants to work on creating a development agenda where human rights are not a standalone goal but are included in all targets, addressing both sides of development – freedom from want and freedom from fear.

Speaking about her personal experiences in South Africa, Ms. Pillay underscored that “not every law is a good law” and “not every effort to enforce the law protects human rights.”

“Rule of law without respect for human rights is an empty shell,” she continued, calling also for strong global partnership, equality and non-discrimination in decision-making, and strong accountability.

In the process of creating a new development agenda based on human rights, representatives have the opportunity “to redefine the very idea of global development”, said Ms. Pillay. “No work more meaningful than this.”

Also addressing today’s opening, Anthony Lake, Executive Director of the UN Children’s Fund (UNICEF), highlighted that deliberations are taking place amid the 25th anniversary of the Convention of the Child, which states that the world’s youngest have rights. Despite this human rights treaty, “the plight of too many is lost,” he said.

Mr. Lake listed moral, economic and humanitarian reasons to aid children and respect their human rights, noting that they remain discriminated against due to gender, ethnicity, disability and other reasons. In addition, children are often overlooked, living in hard to reach areas such as slums, torn by conflict and natural disasters.

Today’s opening panelists also included Norway’s Crown Princess Mette-Maritt who is the UNAIDS International Goodwill Ambassador. She urged politicians to remain committed and decisive in their actions, and to remember young people when creating the future development agenda. She also stressed the successes of a holistic agenda to prevention and treatment of HIV and AIDS, and underlined the important role civil society has played in changing the way health care is delivered.

In programmes today and tomorrow, participants will hear from a variety of Government and civil society representatives. They include UN Deputy Secretary-General Jan Eliasson who will give the keynote address on supporting national and international efforts on poverty eradication and sustainable development. He will speak on a panel with Asha-Rose Migiro, former Deputy Secretary-General and current Minister of Justice and Constitutional Affairs in Tanzania. 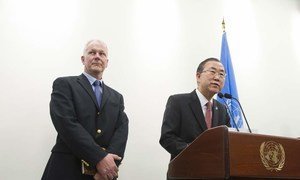 Following talks with United Nations High Representative for Disarmament Affairs Angela Kane, the Syrian Government has affirmed it will grant access to UN inspectors, beginning tomorrow, to sites in the suburbs of Damascus where chemical weapons were allegedly used last week.