The United Nations agricultural agency announced today that it is partnering with Norway to build an advanced research vessel as part of efforts to avert the effects of climate change and other threats to the world’s fish stocks, as calls were heard for urgent action to address those threats at an international forum in Rome.

At the same time, FAO’s Director-General opened the Committee on Fisheries in Rome by stressing the importance of fisheries to the world’s food security and nutrition and sounding an alarm on the threats those resources face.

Fisheries and aquaculture make a “central contribution to food security and nutrition,” Jose Graziano da Silva said, adding that that sustainable development in the world's island and coastal states was especially dependent on the “vitality of oceans and fish stocks.”

“Overfishing, pollution and climate change are putting this vitality at risk. The impacts are already evident. And the world’s poor, in rural and coastal areas, are among the most affected,” he said.

The Director-General pointed out that fisheries and aquaculture were the sources of 17 per cent of the animal protein consumed in the world and up to 50 per cent in some small islands and Asian countries. They were also central to the livelihoods of some of the most vulnerable families in the world.

The Dr Fridtjof Nansen will replace an older craft of the same name that has been navigating the coast of Africa since 1993, carrying out in-depth research into the state of the continent’s marine ecosystems for the EAF-Nansen Project, the latest phase of a unique 40-year programme.

As a direct result of the project and with technical guidance from FAO, 16 countries in Africa have developed management plans for their fisheries, FAO said.

♦ Receive daily updates directly in your inbox - Subscribe here to a topic.
♦ Download the UN News app for your iOS or Android devices.
fish|climate 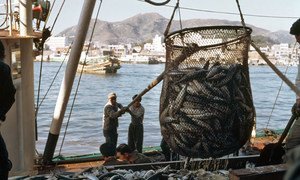