6 June 2014
As part of the United Nations-driven process to craft a new sustainable development agenda, a spectacular line up of global artists will hit the stage tonight at the world body's New York Headquarters to add their voices and talents to the unprecedented global conversation under way to build the future we want.

The international musical event, hosted by the President of the UN General Assembly, John Ashe, will, through the power of music, poetry and video, allow the performers to point the spotlight on the historical opportunity that will arise in 2015 when world leaders will make decisive commitments to set our planet on a prosperous and sustainable path.

The United Nations and its Member States are working to define a sustainable development agenda beyond 2015, the deadline for reaching the targets set by the landmark Millennium Development Goals (MDGs), which range from halving extreme poverty to halting the spread of HIV/AIDS and providing universal primary education. For 15 years, the framework has helped galvanize development efforts and guide global and national development priorities.

Yet, with many countries expected to fall short on the MDGs, the artists at tonight's event will draw public attention to the critical decisions global leaders will make in 2015. From clean water and sanitation to education, from gender equality to employment, these priorities will seek to shape a sustainable future by improving economic and social conditions for all, while preserving our environment.

The global effort to shape a sustainable future has given rise to an unprecedented level of consultations among all stakeholders. Over two million people have already voted on the online platform MyWorld , to share their priorities and tell global leaders about the world they want in 2015 and beyond.

“Our world leaders must show us their commitment in 2015. And we the people of this world – men and women, young and old, from all corners of the globe, and from all races, creeds and cultures – we must push them,” Assembly President Ashe told the lively audience.

He said that while the MDGs had been an enormous step toward creating an anti-poverty movement, now, the world must go even further and bring more people on board for the new global development agenda. So far, the process of capturing new voices has been wide, extensive and unprecedented.

“The MyWorld survey is a chance to add your voice to this growing global movement. The survey has already captured 1.5 million voices from all parts of the world, but we want to hear from even more people. We want everyone to have a say. MyWorld is our world, he declared.

In his remarks, Secretary-General Ban Ki-moon said the new development framework has to connect with people. “In the spirit of tonight, it has to sing,” he said, also pointing to the success of the My World survey.

“And it is why we are so privileged to have musicians here tonight who can speak the universal language and show again the unique power of music to move and mobilize the world. So please enjoy the evening – and make some noise tonight and in the coming months about the world you want,” declared the UN chief.

'Setting the Stage-2015 and Beyond' - World artists take the stage to celebrate what will happen in 2015. Credit: UNTV 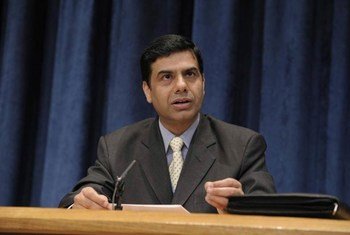 3 June 2014
Ahead of a major United Nations conference on landlocked development countries (LLDCs) set for later this year, delegates at a high-level meeting in Mongolia have called for the immediate ratification of an agreement which will help boost trade and make it easier for these countries to participate competitively in global markets.